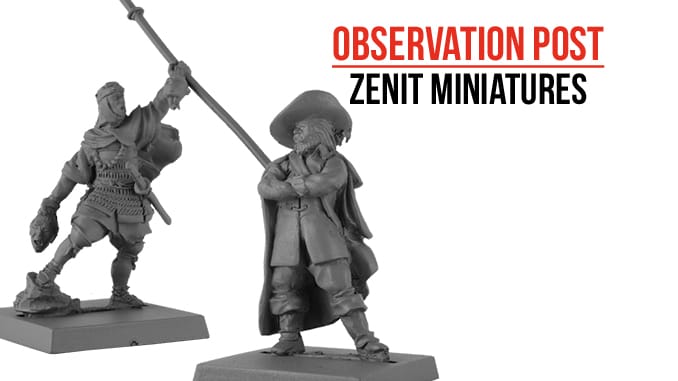 Zenit Miniatures create figures to compliment the Kensei historo-fantasy skirmish wargame. Based upon a blend of feudal era Japan and Far Eastern mythology, this is a character-led game, with characterful miniatures.

The range includes figures for each of the various Factions in the game, whether Samurai Clans, Ninjas, creatures from mythology or Undead.

We have a Sohei Clan Hero, part of the warrior monks faction in the game. Experts in the use of the double-handed Naginata, this warrior proudly displays the heads of his most recent victims.

A recent addition to the game has been the arrival of European traders, so we have the Namban, with their Tercios, swordsmen and arquebusiers. Shown here is the Sergeant Major, a haughty looking warrior with cloak and be-feathered hat ready to take on all comers.

The range is full of similar characters and excellent sculpts, with even the most basic of fighters being presented in dynamic poses. The level of detail is excellent, inspired by some sublime artwork and the influence of Japanese art and mythology. Well worth a look whether you use the Kensei rules or not, these are superior miniatures which set standards.