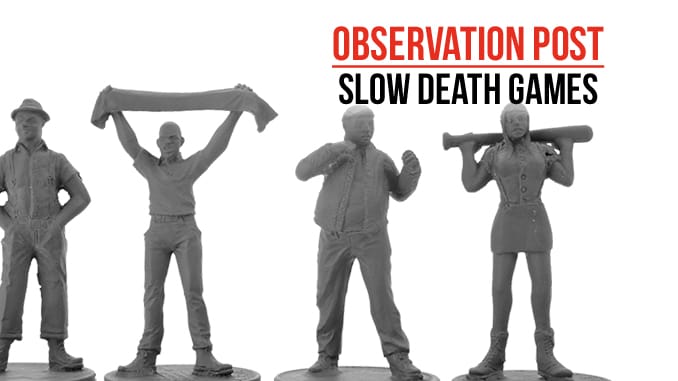 Slow Death Games have crafted a set of rules for modern gang warfare. Called Wild In The Streets, the company offers sets of themed gang miniatures and characters to use in the game.

The packs sent for review are the Skinhead Gang and cEvin, a character miniature.

The Skinhead Gang consists of four figures, Don and Maggie, two named characters, and two random Skinheads. All are dressed in the style of typical lovers of Ska and similar musical styles, with examples of Doctor Martin boots, Adidas trainers, a pork pie hat and a short-skirted look. There are few weapons in evidence, with Maggie cradling a baseball bat across her shoulders and a knuckleduster on the hand of the more rotund feller. One holds aloft a scarf, just waiting to be painted in your chosen team colours.

The single character figure is based upon cEvin Key, founder and member of the Canadian industrial music band Skinny Puppy who helped to define the scene in the mid-1980s up until the very early 90s. The figure can be used as an alternative leader for one of the gangs or a mercenary for any of them. This is a haughty looking figure, with a great pose and a prominently displayed ankh, a potent symbol from Egyptian times.

These are all very well sculpted figures and are extremely characterful, making them useful for all sorts of game systems. Each set of figures comes with a stat card for the Wild In The Streets rules system which covers each figure. Although they are realistically proportioned and closer to 32mm than 28mm, they would fit with most ranges as main characters or larger than life heroes. A great job, supporting an interesting gaming environment and rules.