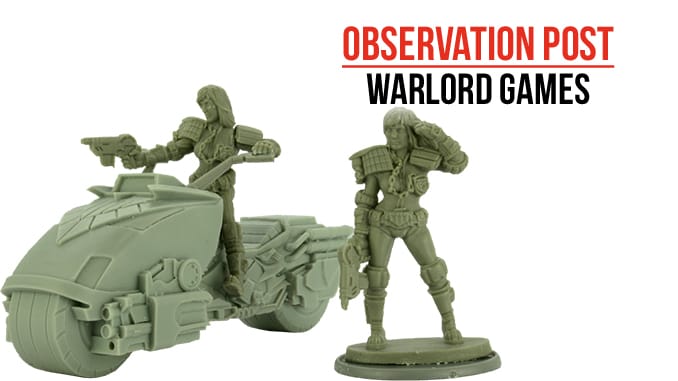 Warlord Games have begun to release ‘Wave 2’ of the miniatures to support their Judge Dredd Miniatures Game. Amongst the various sets is Judge Anderson and a box of Citi-Def soldiers.

Judge Anderson is a character that is almost as integral to the comic book as Dredd himself. A Judge ‘blessed’ with psychic powers, Anderson was first cleared for duty as a Judge after Dredd’s assessment. She is a more relaxed, slightly flippant Judge compared to Dredd, but is still a staunch advocate of The Law, although she does question the Justice Department’s methods at times.

The Judge Anderson boxed set consists of two figures of the Judge herself, one standing with Lawgiver in hand, holding her forehead as she focusses her psychic powers. The other figure is a two-part figure, designed to be assembled as a rider for the third miniature in the set, a Lawmaster Mark III bike, the iconic transport of a Mega-City 1 Judge. Cast in resin and in need of assembly, these are very detailed versions based upon one possible version of the comic book. The blister also contains 4 game cards, 2 character cards for the Judge and her Lawmaster, 1 Armoury card and 1 Big Meg card.

The Citi-Def set consists of six resin cast miniatures. The Citi-Def or Citizens’ Defence Force has a unit in each City Block. The intention is to provide a supplementary force of trained soldiers to support the Justice Department. The reality is the fact that the semi-crazed denizens of M-C1gain access to large calibre firearms, armour and just enough training to be even more dangerous. More than once, the Judges have had occasion to curse the decision…

The figures need a small amount of assembly, and come with standard Warlord plastic bases. They also come with 4 game-related cards, 2 Unit, 1 Armoury and 1 Big Meg card. They are well detailed figures which capture the look of heavily-armed cits in a city full of craziness.

Once again, Warlord’s partnership with the publisher Rebellion means that these are extremely accurate versions of their comic book equivalents. All the miniatures released so far do credit to the licence deal made, and show what Warlord can do with the opportunity they are given.