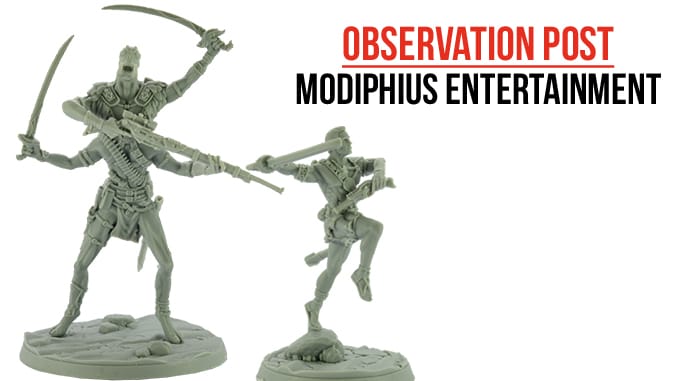 Modiphius Entertainment continues to add to their portfolio of licenced products with the new John Carter of Mars: Adventures on The Dying World of Barsoom tabletop roleplaying game. The game comes with suitable miniatures, designed to represent the heroes and villains of this fascinating setting.

Edgar Rice Burrough’s John Carter of Mars novels chart the progress of former American Civil War soldier John Carter who discovers an ability to project himself to the dying world of Barsoom, which we know as Mars. Finding himself to have heightened strength and mobility, Carter enjoys a whole variety of Pulp-style adventures involving Barsoomian princesses, four-armed White Apes, and much more.

Received for review are samples of the Heroes and a sample from the Beasts sets.

Here we have John Carter himself, armed with sword and pistol and in a dynamic action pose, wearing typical Barsoomian attire. He comes with a 30mm scenic base and the whole figure is provided in top quality resin.

Next comes Tars Tarkas, a member of the Thark race who is taller than a man and has four arms, allowing him to fire a heavy calibre rifle whilst wielding two swords! Although standing in a fairly static pose, its all going on from the waist upwards, with an obvious challenge to ‘have a go’.

The next figure is of Woila, a ‘pet’ which is a cross between a scaly reptile, multi-legged centipede and a mouth full of sharp teeth! Part pampered animal, mostly attack dog, this is a dangerous looking beastie with an attitude.

Lastly, we have a Beast, a White Ape, aggressive multi-armed denizens of Barsoom that attack first, attack second, and perhaps make enquiries later. Posed mid-charge, this savage looking creature is big enough to take on most comers and probably win.

These multi-part miniatures require some assembly. They are high quality resin miniatures, which all come with scenic bases. Fans of the novels will like these renditions as they are more akin to the literature than the Disney movie. A great addition to the Modiphius stable, and one where the companies attention to detail and commitment to getting it ‘right’ shines through.