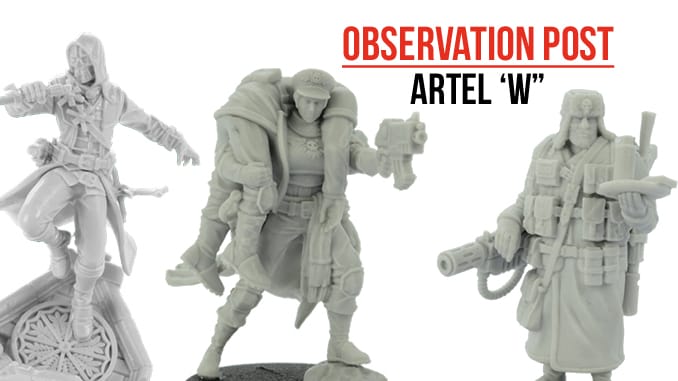 Artel ‘W” Miniatures is a collective of different sculptors based in Russia who aim to produce their own version of a Gothic sci-fi universe. Consequently, they are able to fill in gaps and offer a unique take on the output of other, larger companies.

All the miniatures are produced in high quality resin, based upon CAD renders. The figures are therefore almost exact replicas of the sculpts originally created by the talented members of the group.

A nice touch is the fact that each miniature is sent in a small box, wrapped in paper and string, with a wax seal. Not many companies make this much effort to present their miniatures, and it’s a welcome change to see a little ‘Russian’ style!

Most of the miniatures are sold as individual pieces, although some come as ‘bundle deals’. We picked out three from the range to take a closer look at, three of the more unique looking pieces in an amazingly characterful range.

The first is a miniature of an Officer`s Aide. Consisting of 8 parts, this is a figure in what looks like winter clothing carrying a huge amount of equipment, large backpack, numerous chest pouches, a haversack, a combat rifle barrel down alongside the backpack and a vicious looking weapon slung over his right shoulder. It is therefore quite incongruous to see him holding a tray in his left hand, with a sandwich and flask / vodka bottle! It’s a great miniature, a real change to see something different.

The next figure is a version of a character called Commissar Raivel, based upon the webcomic series Raivel by someone called Gray-Skull. This is a female figure, in peaked cap and trenchcoat, posed firing a large calibre handgun whilst carrying a wounded comrade to safety. Again, this is an unusual subject for a miniature, but one that is very well-sculpted and full of action.

The last figure is entitled Assassin! and is not only well-sculpted but has a really interesting base. The figure consists of 9 parts, including the base, which is part of a clock tower or similar. Again, the overall quality of the sculpting and the level of detail are both very high, aided by the choice of resin used in the casting process.

This is another company that is seeking to challenge the dominance of far larger ones by being able to produce top quality, characterful miniatures which really push the boundaries of what is possible. Granted, the overall aesthetic may not be to everyone’s taste but the level of ability using top quality software really shines through. This collective of Russian talent is one to watch out for in the future and who knows, we may soon hear of these artists working for the very companies they challenge.