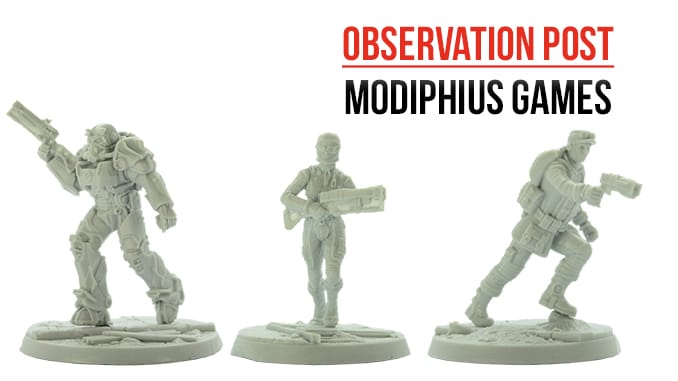 As we approach the full release of Modiphius Games’ Fallout: Wasteland Warfare boxed game and miniatures, we take a look at some of the figures from the Brotherhood of Steel core set.

Our first figure (below) is of a female Lancer, clad in an enclosing helmet, goggles and some type of body suit. She wields a fairly futuristic looking weapon, at least if seen through the eyes of the 1950 / 60’s generation.

The next figure (below) is of a Field Scribe, one of the collectors and maintainers of knowledge acquired from amidst the ruins of what was. This figure is moving fast, pointing a pistol version of the Lancer’s weapon, plus a field cap and goggles. He wears a backpack and a vest covered in small pouches, suggesting he can carry a great deal.

The last figure (below) is one of the iconic T60 Paladins, clad in a power armoured suit which puts the ‘steel’ into the Brotherhood. This is an imposing fellow, but carries the same rifle weapon as the Lancer. This is a warrior who can survive pretty much anything thrown their way, and would need some heavy duty weaponry to eventually take it down.

A bonus feature is that each figure comes with a scenic base which adds to the overall ‘look’ of the miniature, a nice touch.

Eagerly awaited by many gamers, the miniatures for this game look almost exactly like their video game counterparts and will be available in either high quality PVC or resin. For more information, visit the Modiphius website.