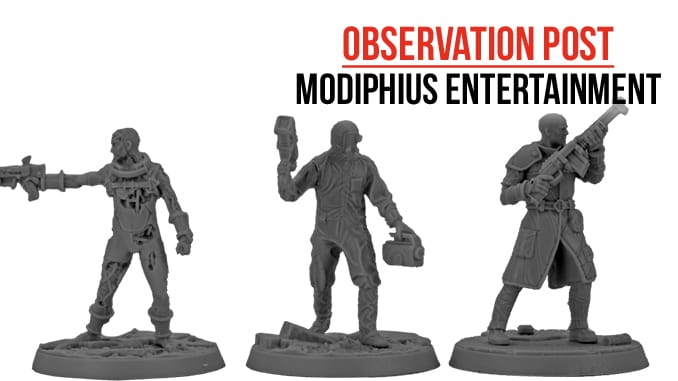 Since Modiphius Entertainment first gained the licence to produce a tabletop miniature game based upon the Fallout franchise, they have consistently supported it with excellent miniatures.  One of the latest core boxed sets represents the mysterious Institute, stealers of people and creators of synthetic warriors.

The 32mm figures inside the box are made from the usual excellent quality of resin. These are noted as being ‘multi-part’ miniatures, but assembly is simple and rapid using a suitable glue. The bases provided for the miniatures are nicely detailed, representing the inside of a bunker or lab, plus the exterior realm of the post-nuclear war wasteland. There are 4 x Gen 1 Synths, 2 x Gen 2 Synths, a Courser and a Scientist.

The Gen 1 Synths bear a passing resemblance to the robotic cyborgs from the Terminator movie franchise, but these are more akin to synthetic people in the modern Westworld sense. The Gen 2 Synths have the clothing and skin-like trappings of humanity, although this has been largely or partially stripped away by what would appear to be weapons fire.

The Courser figure is the most ‘human’ looking Synth figure, representing the elite versions who infiltrate a group and take steps to secure subjects. In contrast, the Scientist figure is clad in hazmat clothing and carries both a weapon and a device of some sort.

These figures would easily fit into a number of science fiction or post apocalyptic games, and have some great details that would reward careful painting. Another part of the Fallout:Wasteland Warfare tabletop gaming universe is released, doing more than justice to the source material and offering something familiar to those who game using other rules.