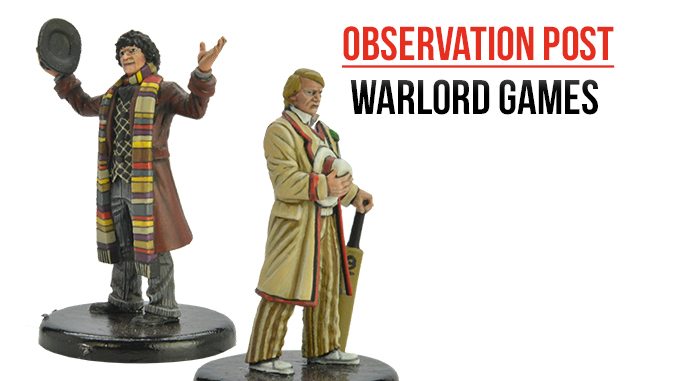 Warlord Games have added to their Doctor Who miniatures range with two new boxes of plastic figures. Gamers and collectors now have more Doctor options than ever before!

As part of a deal with Gale Force 9, Warlord has taken possession of a large number of miniatures designed for use with the Time of the Daleks boardgame. These have been re-packaged by Warlord to create a set of collector’s models and figures for use with the Exterminate! tabletop miniatures game.

The first set of figures consists of the First, Fourth and Tenth Doctors. Despite being designed as boardgame pieces and created in one-piece plastic, these are fairly detailed sculpts that capture the essence of the character. The First Doctor sculpt has him in characteristic pose, hands on the lapels of his jacket and a look of disdain on his face. In contrast, the Fourth Doctor is much more exuberant, posed partway through lavishly introducing himself or possibly expounding upon some points. The Tenth Doctor is more restrained, his pose ready to use his sonic screwdriver to good effect.

The second box of miniatures has the Fifth, Eleventh and Twelfth Doctors. Again, despite being one-piece plastics, these are good quality versions of the different incarnations of the same man. The Fifth Doctor sculpt has a number of nicely rendered details, complete with pinstripe cricket trousers and the essential stick of celery in his coat’s lapel. Interestingly, he leans upon a cricket bat, which appears a little incongruous but shows one of this regeneration’s preoccupations. In contrast, the Eleventh Doctor is in a much more active pose, on the move and ready to take aim with his sonic screwdriver. This Doctor is much more an action hero and the sense of movement invokes this very well. This ‘man of action’ motif is carried forward into the Twelfth Doctor sculpt, with a characteristic pose similar to those found in the early days of this version.

These figures are all around 30mm from foot to eye, making them shorter than the others in the Warlord Games range but closer to the huge range of 28mm figures from the company. Although not included in the box, there will be downloadable game cards for each of the Doctors so they can be used with the Exterminate! games system. They lack the finesse and sculpting quality of the metal figures that Warlord Games have produced for the game, but these are still good quality miniatures that come in the type of packaging that is as collectible as the figures themselves.