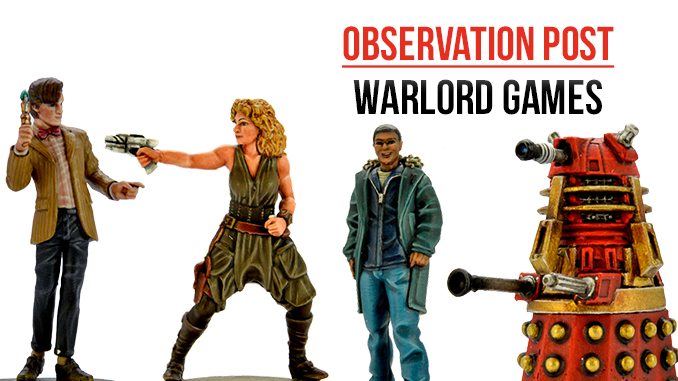 Warlord Games continues to support the Exterminate! Doctor Who Miniatures Game, co-authored by Ricard Fortun and Wayne Bollands. The latest and upcoming releases include more Doctors and their Companions from the New Era, plus some Classic Era characters from the 1960’s.

The first set is available now and allows you to add the Eleventh incarnation of the Doctor and his most well known Companions to the game. Here we have the Eleventh Doctor himself, in his first costume as seen in ‘The Eleventh Hour’. There is also a figure or Amy Pond and Rory Williams, again in the costumes they wore when first encountered. The last two figures in this five figure set River Song, in a nice action pose, and Clara Oswald, in the outfit she ‘imagined’ during the ‘Asylum of the Daleks’.

Appropriately, the next five-figure set takes us back in time to the revival of the TV show, with the adventures of the Ninth Doctor and his Companions. The Ninth Doctor himself is here in all his glory, ably supported by his first Companion of the New Era, Rose Tyler. Also present is Jackie Tyler and Mickey Smith, the support system for Rose and the Doctor alike. Lastly, we have Captain Jack Harkness, the conman and renegade Time Agent who went on to become a hero who died at the hands of the Daleks, only to be resurrected by the Bad Wolf herself.

Heading back in time once more, we land in Autumn 1968, the first appearance of the Dominator’s and their servants the Quarks. There are two Dominators, members of the ruthless race who takes issue with the Second Doctor and his Companions who seek to thwart their plans. As superior beings, the Dominators use their robotic servants, the Quarks, to attack others and carry out their plans. Three of these robots are included in the set, providing the back up the Dominators need on the tabletop.

These figure sets all come with suitable cards to enable the contents to be used with the Exterminate! rules system. This is a positive move by Warlord and there are plans to offer cards for every set previously released. The miniatures are also packaged in such a way as they could be used as collectibles by Whovians, requiring only a suitable paintjob.