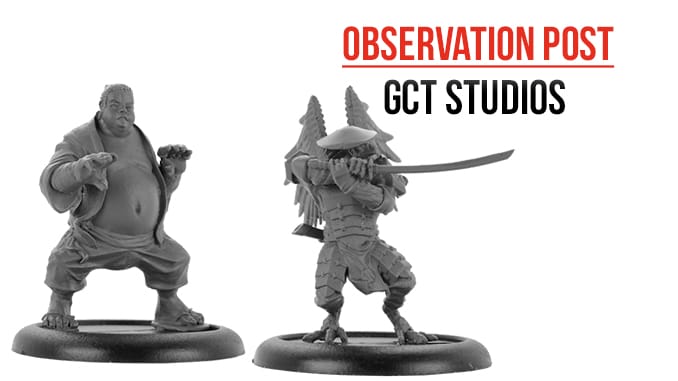 GCT Studios created their own take upon a Far Eastern fantasy setting. This includes a range of characterful miniatures based upon the Factions within the game.

The miniatures are a mix of human and non-human characters. They are large figures that have a largely Japanese feel to them, with many of the more monstrous representing creatures from the mythology of that country. There are Oni demons, Sumo wrestlers, serpentine warriors and birdlike Samurai, all of which come with profile cards that provide their in-game stats.

The level of sculpting on each of these figures is excellent, really conveying the fantastical underpinning of Japanese folklore and the heroic tradition of the Bushido code. Every single gaming piece is extremely evocative of the game setting and is unique in its own right. Weaponry, armour, facial expressions, clothing, all capture the essence of a non-Western fantasy setting, whilst also containing enough ‘real’ features to be fairly believable. The serpentine member of the Ito clan snarls in rage, the noble winged warrior stands ready with his katana in a classic stance and the Sumo fighter has his feet wide apart to balance himself for action.

The figures shown here are but three of the hundreds of characters available. They may be bought singularly or in starter packs. Although designed for use with GCT’s Bushido rules system, they could feature in any game where larger than life figures are needed, especially the more fantastical elements. Oni demons battling noble Samurai and Ashigaru in Test Of Honour? Here are the figures you need!