IT’S OUR BIRTHDAY – AND WE’RE GIVING YOU A PRESENT! 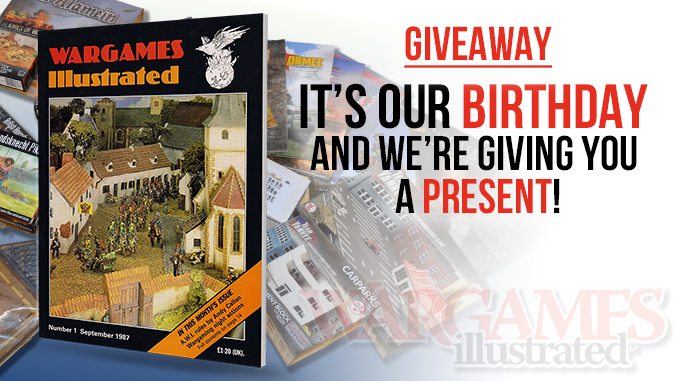 When Duncan Macfarlane sold 300 copies of the September 1987 issue of Wargames Illustrated magazine at the Sheffield Nationals, little did he know that WI would still be going some thirty years later! Duncan sold the magazine to Battlefront in January 2009 and it changed hands again in April 2015 when Editor Dan Faulconbridge took on the magazine.

We have subscribers in 21 different countries around the world and the magazine continues to be the best selling wargames magazine on the market, now in digital as well as paper format.

We would like to celebrate our 30th birthday by giving you, dear wargamer, the chance to win hundreds of £££$$$€€€ worth of wargaming goodies.

To be in with a chance of picking up one of three prizes you need to do something for us – we’d like to know your favorite type of wargaming article. Is it a Scenario, Rules Showcase, Designers Notes? Or something else?

On Monday 18th September, we’ll announce the winner of –

P.S. If you don’t regularly read Wargames Illustrated A) You’re a foolish man/woman – you are missing out on the world’s best monthly wargaming fix! B) You can still answer our mini survey and enter the competition, by telling us what type of article you think you would enjoy the most.

The completions is now closed, Winners will be announce shortly.