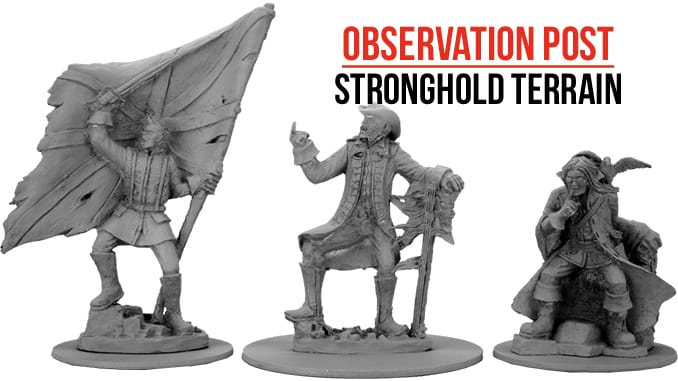 Stronghold Terrain have a great ‘supporting cast’ of figure ranges for a number of popular games, including the excellent Dead Man’s Hand Wild West gunfight game. However, one of their largest ranges is intended for use with the SAGA rules, most notably the Dark Age and Age of Magic universes. Some of their latest releases include a homage to various Heavy Metal bands and some hardcore Danes.

The recent King of Metal releases are based upon a successful Kickstarter. If you are a fan of Heavy Metal album covers or bands of the 1970s and 1980s, you’ll recognise some of the stars and artwork the figures are directly or loosely based upon. They’d fit nicely as Warlords or character figures in a whole host of games, perhaps mostly within the fantasy genre. There are seven packs in the range so far, with the possibility of more to follow.

The more historical pack consists of four Viking veterans wielding Dane axes. These are well-armoured warriors, with separate arms and shields. These are well animated sculpts, with nicely realised armour and clothing.

The figures come with metal washers, paper discs and magnets for basing purposes. They represent just a part of the available figures from this small but important German manufacturer. Take a look at their website and see what else they have on offer.