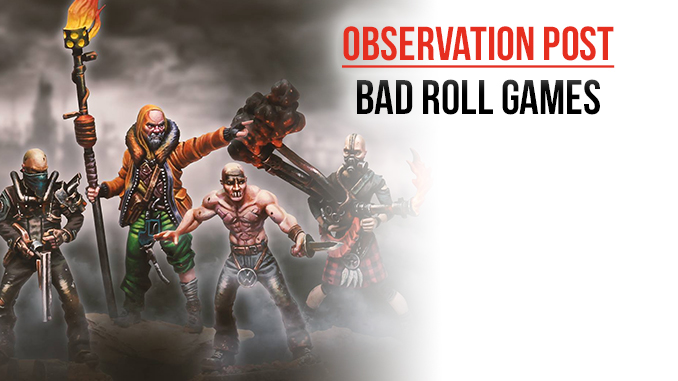 Bad Roll Games of Spain produce a game setting and selection of miniatures that charts the progress of survivors, gangs and other factions in a bleak, post apocalyptic world.

The basic premise of the game universe is that the rich elite decide to ‘escape’ an overly populated by creating a series of huge cities, Megalopoli, that are self-contained. Having fooled the wider population into helping to create these refuges, the elite used their military power to force the workers and poor from the cities, sealed themselves in and launched nuclear, biological and chemical weapons that scoured the Earth itself, creating a largely poisoned landscape and cutting the population outside the cities down to 1% of the original total. Life in the cities is full of luxuries but dominated by jealousy and intrigue. Life outside the cities is a daily struggle for survival amidst gang warfare, ruins and bizarre cults.

The pack sent for review represents one of the main cult factions, the Black Blood Children. Inside some clever packaging, themed as a video cassette case for the type of movie that inspired the game, are five resin miniatures. Each is a characterful miniature that forms a typical ‘gang’, in this case the oil worshipping Black Blood cult who control a working oil refinery as if it is a holy site.

The standard of sculpting and casting on these miniatures is evocative of a group of post apocalyptic ‘crazies’, whilst also being of a high standard. Each miniature represents an archetype from the game, with close combat, light, standard and heavy weapon options, plus a suitable leader figure.

These are some elegantly styled miniatures from a range of interesting and fairly unique miniatures. The blend of classic post apocalyptic genre tropes and an original game universe is very well done and bodes well for the future of this small company.