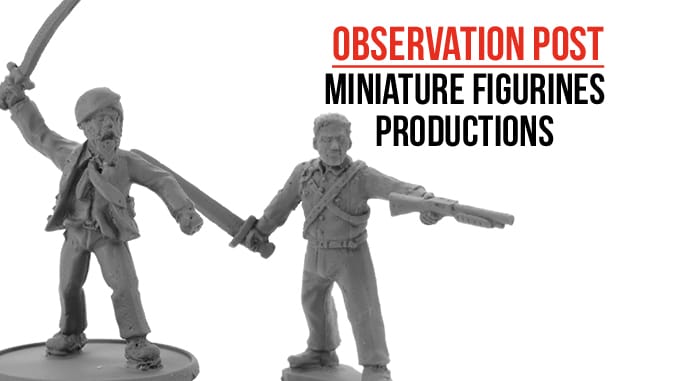 Miniature Figurines Productions have added more metal miniatures to their Bullets and Brains range. The range provides figures for gaming your standard zombie apocalypse but is also linked to an upcoming ruleset from Partizan Press.

The packs sent for review are entitled William ‘Pine’ Ashdown and Balvinder ‘Baz’ Tejpal, both characters taken from the background of the upcoming Quick and the Undead rules system. The rules themselves set the zombie outbreak in the UK, but can obviously be used on a global basis.

William ‘Pine’ Ashdown comes with 6 arm and weapon variants, including a shotgun, pistol, chainsaw and longsword. There are also a choice of scabbards, one empty and the other with the stored hilt of a sword. The figure itself is therefore provided as torso, legs and head to which the arms and accessories may be added. This is a heroic looking fellow, in shirt and trousers, with crossbelts and a slightly weary cast about the face.

Balvinder ‘Baz’ Tejpal is a complete miniature, dramatically posed in mid-charge and holding aloft a curved scimitar. This is an older, bearded Sikh gentlemen in a suit and tie, fighting his way through the undead in style, a Lion amongst the rotten.

Characterful and fun, these would look good in a whole host of apocalyptic environments. The Bullets and Brains range also includes a host of Survivor and Zombie miniatures. One of the selling points of the range is the fact that most of the survivors also have a zombie version of the figure once they have succumbed to the virus. Why not check the range out and see what else can be found?