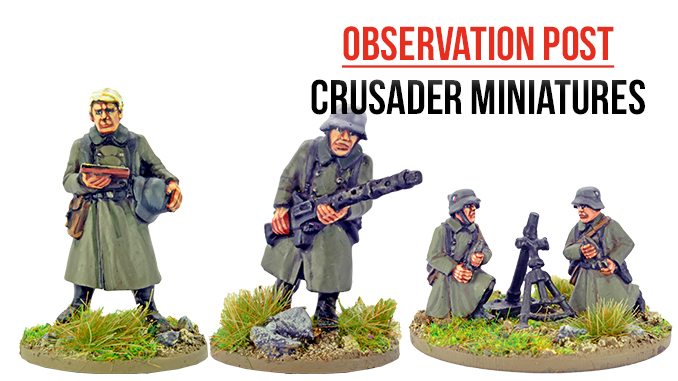 Mark Sims of Crusader Miniatures has added something a little different to his World War Two German range. Rather than focus upon smocks and the Late War era, he has chosen to produce Early War Heer infantry in greatcoats.

There are seven packs in total, with each pack consisting of four figures apart from the Heavy Machine Gun and Mortar crews, which have three in each set. There are two packs of infantry with Kar-98k rifles, one pack of NCO types with Mp-40 sub machine guns, two light machine gun teams with the MG34, a command set, a heavy machine gun team and a mortar crew, both of which come with an appropriate weapon. That’s 26 miniatures in total, not bad for a first release.

The uniform details are obviously concealed beneath the greatcoats but all the figures wear the correct uncovered helmets and equipment. This places them as being basic Wehrmacht infantry from the 1939 to 1942 period, so suitable for action in Norway and the first signs of winter on the Eastern Front. However, they are not exactly ‘bundled up’ against the cold with scarves and gloves, and could represent infantry from across Europe or even during the cold nights in the North African desert.

The variety of poses on offer are fairly naturalistic and look appropriate for men at war rather than being in odd or awkward positions. These are not nostalgic copies of the Airfix plastics of some people’s youth, no matter how much we of a certain age may like them. My favourite figure is in the command pack, the bareheaded officer or NCO checking his position on a map or planning his next move. It’s a very ‘real’ command pose compared to those found amongst some other manufacturer’s ranges.

Overall, these are a welcome addition to the Crusader range and a useful option for those looking to game the Early War period. I’d like to see a similar concept adopted for some of the other nations, perhaps Japanese for Manchuria or British troops in greatcoats? With so many different manufacturers producing 28mm figures for WW2, the chance to get top sculptors filling needed niches is great to see.