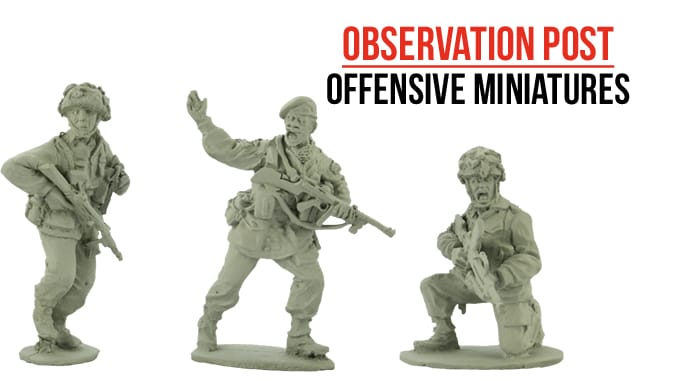 Offensive Miniatures already have a fair number of figures packs in their excellent World War Two themed ‘Elite’ range. However, one of their upcoming releases at Salute is an adjunct to that range, a number of packs of British Paratroopers.

We have one set of samples from the upcoming release, consisting of an NCO with Thompson SMG, a kneeling officer with Sten Mk. V, Bren gunner, walking helmeted trooper with Sten and a firing figure with Lee-Enfield Mk. IV. Weapons and equipment suggest they are most suitable for the Operation Market Garden period and beyond, although they could also serve as part of the Normandy Landings.

These are excellently sculpted figures, with great attention to detail in terms of weapons, equipment, uniform and pose. The facial expressions on show are also very well done, with each figure having a real sense of characterisation. These are so-called ‘realistically’ sculpted figures, in that they lack the bulk of some other ranges.

These are a great first example of a hopefully quite large number of packs of figures. The overall quality is of a high standard, and these are a welcome addition to the options available for 28mm World War Two gamers.