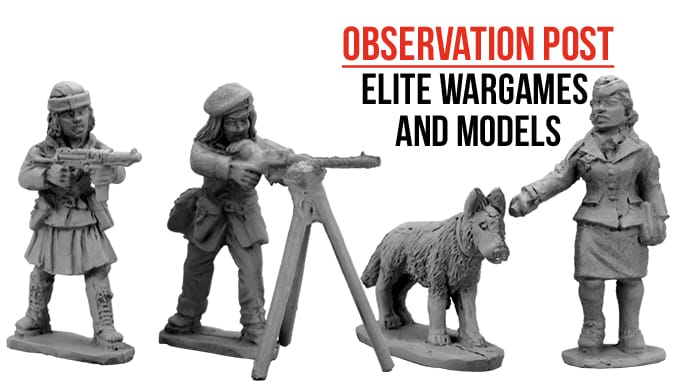 Elite Wargames and Models have added more figures to their Female WW2 range. At the end of 2019, they had two new packs, GW3 Luftwaffe Female with Dog and RW2, Resistance Firing MG34.

The Luftwaffe Female with Dog consists of a skirted figure in Luftwaffe uniform and a German Shepherd canine. The human figure carries what looks like a handbag in her left hand, and is depicted walking whilst holding the dog’s lead close to the animal itself. The German Shepherd seems fairly relaxed, walking alongside its handler.

The second pack consists of two Resistance fighters in French garb. One of the fighters wears what could be a bandage or bandanna around her head and is firing an MP40 SMG. The other is depicted firing and MG34 LMG at a flat angle, despite the fact that the pack is supplied with a tripod Anti-Aircraft mounting for the weapon. Both look suitably determined and ready for action.

These are suitably sculpted figures and each figure has some character. They would fit very well with other 28mm ranges on the market and represent some of the more unusual or unsung women who served during World War Two.