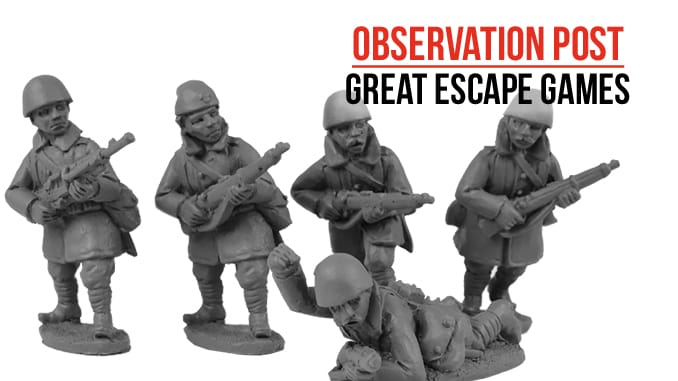 Great Escape Games have added another string to their bow, focusing once more on the theatres of World War Two that other companies often ignore. This time, they have added the first 24 figures in a 28mm range of Greek Ezones, or Mountain Infantry.

Focusing upon the Greco-Italian War from October 1940 to April 1941, the figures in this range may also be used in other theatres during all parts of the war in the Mediterranean and some areas beyond.

Each of the figures is depicted in their characteristic, long doulama jacket, the distinctive M1934/39 helmet or their farion cap. The Evzones were amongst the elite forces of the early war Greek army. They operated as mountain infantry and fought in a number of key battles of the Greco-Italian War.

The first release of figures consists of two packs, with a platoon deal on offer.

The 4-figure pack comprises an Officer, NCO, Medic and Runner. The second pack contains 10 figures, comprising 1 x NCO with rifle, a Gunner with Hotchkiss M1922 LMG and an Ammo bearer w/Rifle, a Rifleman with VB grenade Launcher and 6 Riflemen armed variously with rifles and carbines

The sculpting on the uniforms, equipment and weapons appears accurate, although the faces of the figures are lacking detail and a sense of character.

These are fairly unique figures and it is good to see the company offering some of the smaller nations who fought during World War Two. These are a welcome addition to the options available to gamers. Future releases are rumoured to be more of the same, plus their Italian Alpini opposition.