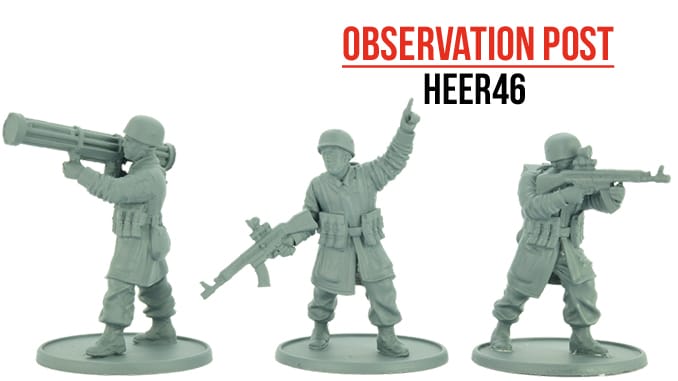 Heer46 have added to their excellent range of German Fallschirmjäger with a  three man special weapon team.

The first figure is an NCO or officer waving his men forward, armed with a STG44 equipped with a ZG 1229 Vampir 1229 (ZG 1229), also known by its code name Vampir, the infrared night scope and sighting mechanism first produced in 1944 and offered to more troops from 1945.

Both the first and second figure are carrying ammunition boxes on their backs, ammunition no doubt intended for use by the final figure who is wielding a Fliegerfaust / Luftfaust, a German prototype of an unguided, man-portable, and multi-barreled ground to air rocket launcher,  designed to destroy enemy ground attack planes.

These are very well sculpted miniatures, with some great detail on the weapons and equipment. They fit in nicely with the current crop of miniatures from the company, rounding out the range with even more options.