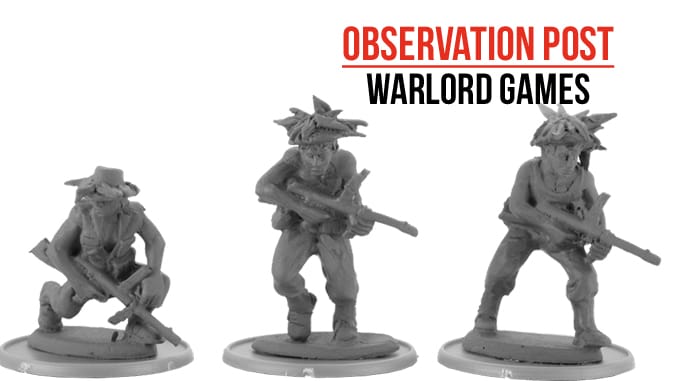 Warlord Games add to their Bolt Action range with these Australians designed for use in the Pacific theatre. These clamshell packs build upon those released for the operations on New Guinea and add yet more unit options.

The latest releases add some much needed support units to those forces outlined in the Campaign: New Guinea supplement. The packs include three different pieces of artillery. They range from the 6-pounder Anti-Tank gun, through the 75mm Pack Howitzer to the 2-Pounder Light Anti-Tank gun. Each comes with a suitable crew, which could also double as a crew for the North African war. They provided much needed ‘punch’ when facing Japanese armour or, in the case of the howitzer, close support for troops under attack by Japanese infantry or those ‘Diggers’ about to launch one. These guns are all metal kits, which should be quite easy to assemble and benefit from having a large round base in each pack.

The other packs are a Forward Observer Team, a Scout Team and a Medic Team. The Forward Observer team consists of three figures and a radio. One is the radio operator, the other an observer with binoculars, whilst the third kneels next to the others. The Scout Team also consists of three figures, this time ready for action and armed with Owen SMGs. They carry very little equipment and two have done away with their shirts in the heat, whereas the third has removed the sleeves of his own. All three have used the local flora to break up the silhouette of their headgear and appear capable of moving stealthily through the jungle. The final pack is a Medic Team, complete with medic, a casualty on a stretcher and four of the local populace, the ‘Fuzzy Wuzzy Angels’ that saved so many Australian lives during the campaign.

These miniatures are, as always, a useful addition to the Bolt Action range. They also have some nicely realized character, especially the Medic Team and the weapon crews. Its good to see that Warlord continues to support their supplements with releases even a few months later, demonstrating their commitment to providing all that is required as the ‘home’ of 28mm World War Two.