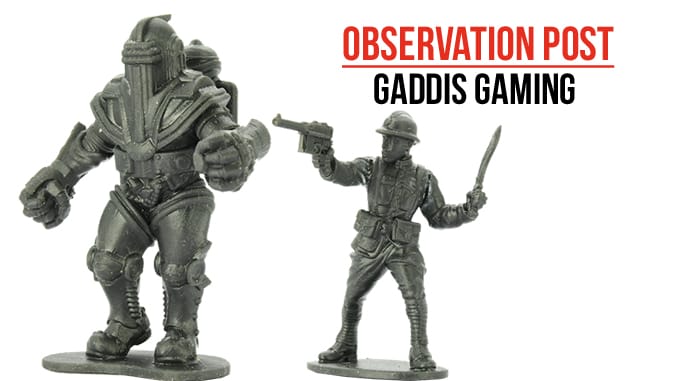 Gaddis Gaming in the USA have some interesting and unique miniatures which cover both World War One and the company’s ‘Weird’ War One rules and setting, Shattered Crown.

The regiment was nicknamed the Black Rattlers. The nickname Men of Bronze was given to the regiment by the French and Hell-fighters was given to them by the Germans. During WWI, the 369th spent 191 days in frontline trenches, more than any other American unit. They also suffered the most losses of any American regiment with 1,500 casualties.

There are many brave souls who fought as part of the regiment but some of the most memorable are immortalised by the figures manufactured by Gaddis Gaming. The company offers a 9-pack of Harlem Hell Fighters, including: Sgt. Henry Johnson, Sgt Needham Roberts, Bill Robinson, Ed Williams, George Robb, Harry Haywood, Herbert Taylor, Spottswood Poles and campaigner and nurse Susan Elizabeth Frazier.

All the figures bear the facial features of their real-life namesakes, taken from research using photographs and descriptions. The quality of sculpting is of a high standard, and the figures wear US uniforms and the French Adrian helmets and equipment they were issued having been assigned to the French Army.

The figures are suitable for use with any WWI French or US army but have other uses as well within the Shattered Crown ‘Weird’ War background. An example of one of the company’s dedicated Weird War One miniatures is this Dreadnought Battlesuit. A touch of ESF or Edwardian Sci-Fi is an integral part of this design, offered in resin at the moment.

Gaddis Gaming are one of those smaller outfits that ‘dare to be different’ by offering something fairly unique amidst the plethora of similar looking releases. These are good quality figures which cover an unusual topic.