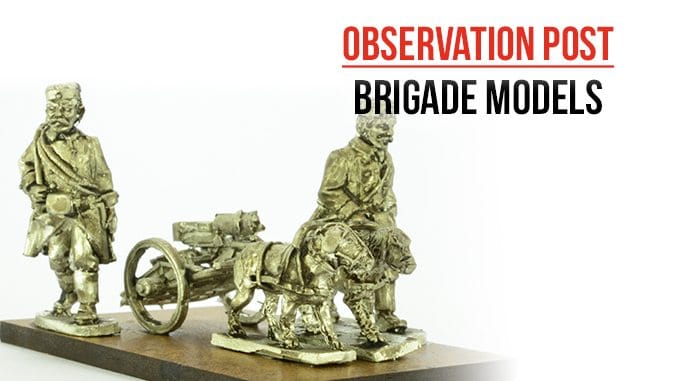 Brigade Models have one of the most complete ranges of Belgians for World War One, covering a wide number of infantry units, cavalry and more.

The miniatures themselves come from a variety of different types of units. There are Grenadiers, Carabiners, cyclists, Lancers, Chasseuers-a-Cheval and Guides. A number of styles of headwear are also present, allowing you to field formed, organized units or perhaps less regimented or ad-hoc forces. Available are troops in Shako, Tyrolean hats, Side Cap and Feldmutze. Command units complete with bugler are here, with officers in Kepi and a number of NCO’s. The cavalry are also varied, with Czapka, Colback, Shako and Field Cap.

One of the more unique parts of the Belgian Army were the Machine Gun Dogcarts. Dogs were used to pull carts containing Maxim Machine Guns, with other carts being laden with ammunition for the MG’s. The range includes said dogcarts, as shown. There are also troops on bicycles, which added mobility to an infantry unit as they headed to and from the front.

These are well-sculpted miniatures that provide the gamer with a number of choices. Here we have a unique army that doesn’t get enough use on the tabletop, but with a range like this, perhaps they should.