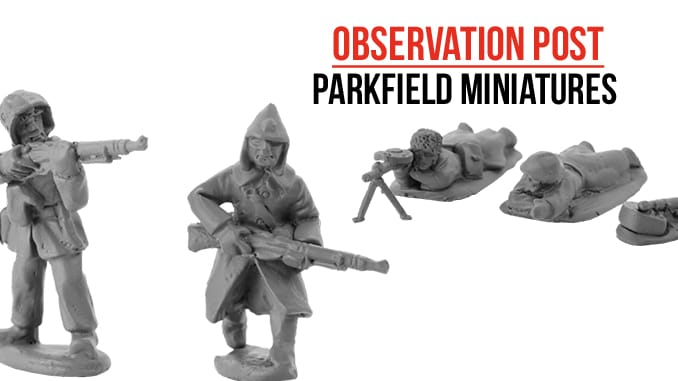 Parkfield Miniatures have added to their ranges with new figures for the 1939 – 1940 ‘Winter War’. There are a number of packs of Finnish and Russian infantry, with a number of options and deals available.

The so-called ‘Winter War’ took place between Finland and the Soviet Union from late 1939 until early 1940. Although the Finns had a number of notable successes against the Soviets, the Soviet forces eventually won, gaining concessions in terms of land and economic benefits.

The Finnish and Russian figures are available as single castings. The majority of the Finnish are clad in snowsuits, mostly armed with rifles but some with sub machine guns. There are also two light machine gun teams , one prone firing (seen below) and the other moving, consisting of a two-man crew. An officer, NCO and medic complete the options.

The Russian figures (seen below) have roughly the same spread of troops types as the Finns. The majority of the figures are under-dressed for the harsh Finnish winter with greatcoats and the traditional Russian budenovka pointed woollen hat, complete with earflaps.

The figures are available in Section and Platoon packs, which provide good value for money and complete forces for use with any set of World War Two rules.

These are well-sculpted figures and are realistically proportioned 28mm miniatures. There aren’t many options available for the Winter War in 28mm, and these are a useful addition for those looking to game this prelude to World War Two.