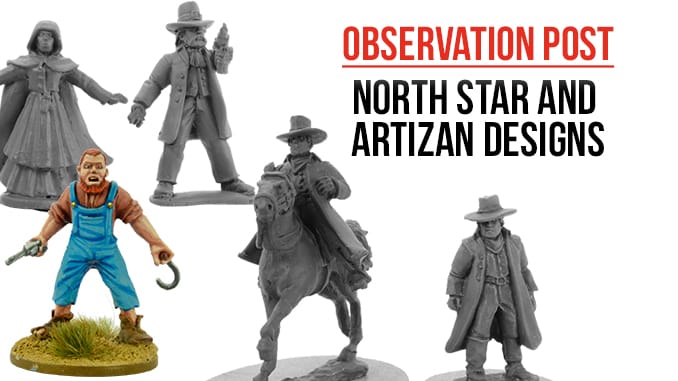 North Star and Artizan Designs create a range of Weird and ‘Historical’ Wild West miniatures. Some of the latest additions either directly support the new Forbidden Power supplement for the Dracula’s America range or may be used for both the ‘strange’ and the ‘straight’ version of the core rules or any other Wild West themed gaming.

The new Dracula’s America: Forbidden Power supplement adds to the narrative of the game and adds a number of new rules and character options. There are two new Factions in particular, the Salem Sisterhood and the Cult of Dagon.

The Salem Sisterhood Faction Posse is led by the powerful white witches of the Sisterhood, in tune with the Arcane balance of the natural world. Alone, they are vulnerable – when used as a Coven, their mastery of Arcane Power grows exponentially.

The Church of Dagon Faction means throwing in your lot with deranged fanatics who live and die to serve unspeakable eldritch horrors from another dimension. Led by a deranged preacher and consisting of both human and strange hybrids,

The Kin do not feature in any of the Dracula’s America books and are only available as a choice during North Star’s pre-order period, known as a ‘Nickstarter’. The Posse list comes free with each Nickstarter. They are a cannibal tribe, dwelling in the hills, whom strike against anyone in their latest quest for a meal.

The Artizan Designs range already contains a number of miniatures that are of use to Wild West gaming. Some of the latest packs are mounted and dismounted versions of the same character, named as lawmen, bounty hunters and buffalo hunters. These could all feature as part of the Dracula’s America game setting, as could any of the other miniatures in the range.

With both ‘official’ North Star figures for the Dracula’s America game universe and the wider Artizan Miniatures ranges, North Star has pretty much everything you need and more to enhance your Weird and Wild West gaming. Take a look at the website and check out the Nickstarter currently in progress.