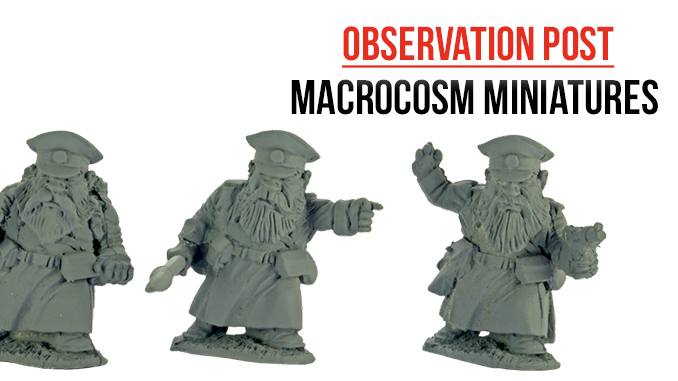 Macrocosm Miniatures have created their own take upon a Weird War One concept. They have taken the fantasy races of Dwarves, Goblins and Halflings and placed them into the ‘mud and blood’ of an alternative early 20th Century. Received for review were some of the Dwarves, based upon the Russian Imperial army.

Although based upon the realms of fantasy, these miniatures have uniforms based upon reality. Each wears a greatcoat and military cap in the Russian style, with weapons and equipment that looks appropriate for the WW1 era.

The figures all have separate heads. The Command pack has an officer, standard bearer and NCO, the latter two with separate arms. All the heads are suitably bearded, with a touch of Russian styling upon occasion.

In addition to standard riflemen, there are also figures with specialist weapons, such as these armed with a scoped sniper rifle and a Lewis gun.

The ‘Russian’ Dwarves range includes infantry, armour, support weapons and cavalry. The other forces include ‘German’ Goblins and ‘British and French’ Halflings, plus a Treeman which may be used in fantasy or Weird War One games.

Other miniatures from this small company include more fantasy variants of historical eras, including Crusaders, Samurai and the English Civil War. There are also ‘classic’ fantasy miniatures, pirates and science fiction ranges on offer.

For a different take on a number of genres, take a look at the Macrocosm Miniatures website.