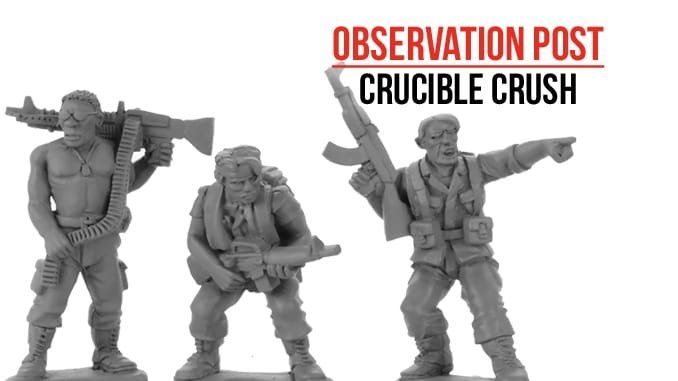 Bob Murch of Pulp Figures has teamed up with Crucible Crush to expand the Black Sun miniatures range. This is a ‘Weird War’ setting for Vietnam, where US and Vietcong become trapped in an alternate reality of Elder gods and an even more deadly jungle. Various figures are already available, with a Kickstarter to launch more and an accompanying game.

These figures are similar in size to those from Mark Copplestone, with a similarly excellent approach to creating some excellent characters. The American figures have the correct equipment and ‘look’ for the period, whilst also retaining that ‘Pulp Era’ appearance that sculptor Bob Murch is best known for, although the period is perhaps best decribed as Neo Pulp. Although we’ve featured the figures from the American Personalities pack, every US-based figure has a sense of personality.

One of the ‘weird’ aspects of the game is the preponderance of creatures with a partly Lovecraftian bent, as evidenced by these Fishmen Fishmen. However, the influence of the modern world is here, with the ‘Fishminh’ armed with French rifles from the days of French Indochina and one with a more modern RPG launcher.

These are great figures, as to be expected from Bob Murch, and the whole concept is fairly fresh in a crowded ‘Weird War’ market. Great ideas, good sculpts and useful for a whole variety of rules, the Kickstarter to expand the range launches on 8th March 2019.