28mm Wars of the Bruce’s 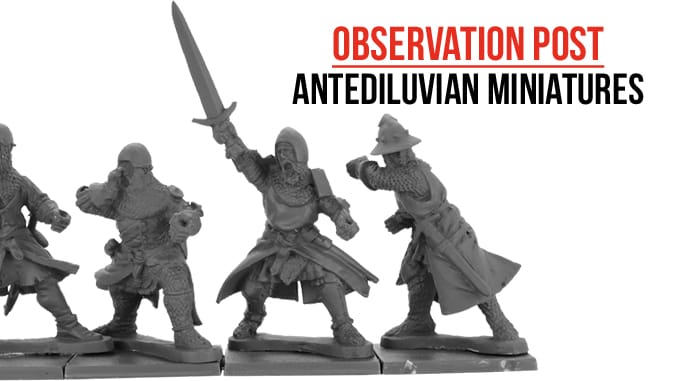 Antediluvian Miniatures have a small but growing range of miniatures suitable for the struggle for Scottish independence from England in the 14th Century. The figures sent for review are Foot Command and War of the Bruces’ Spearmen 1.

The Foot Command consists of four figures, all of which may be armed with the wire  spears provided in the pack. The intention here is to use one of the figures as a commanders of a schiltron formation, complete with a standard bearer, gripping with two hands. The other figures include a horn blower, a bearded leader holding a sword aloft and a figure shouting orders.

There are also four figures in the War of the Bruces’ Spearmen 1 pack, which is the first of this range particularly focused on the period. They would probably mix in well with the other Scots Spearmen packs available from the company. These are also designed to form part of a schiltron formation, ready to push against English attackers as the latter charge forward.

These are nicely animated figures which look excellent. The sculpting style lifts these warriors into characters rather than faceless hordes and the choice of subject is different enough to other offerings to make them worth a closer look. As always, these figures are at the ‘top end’ of quality, despite being from a small company.