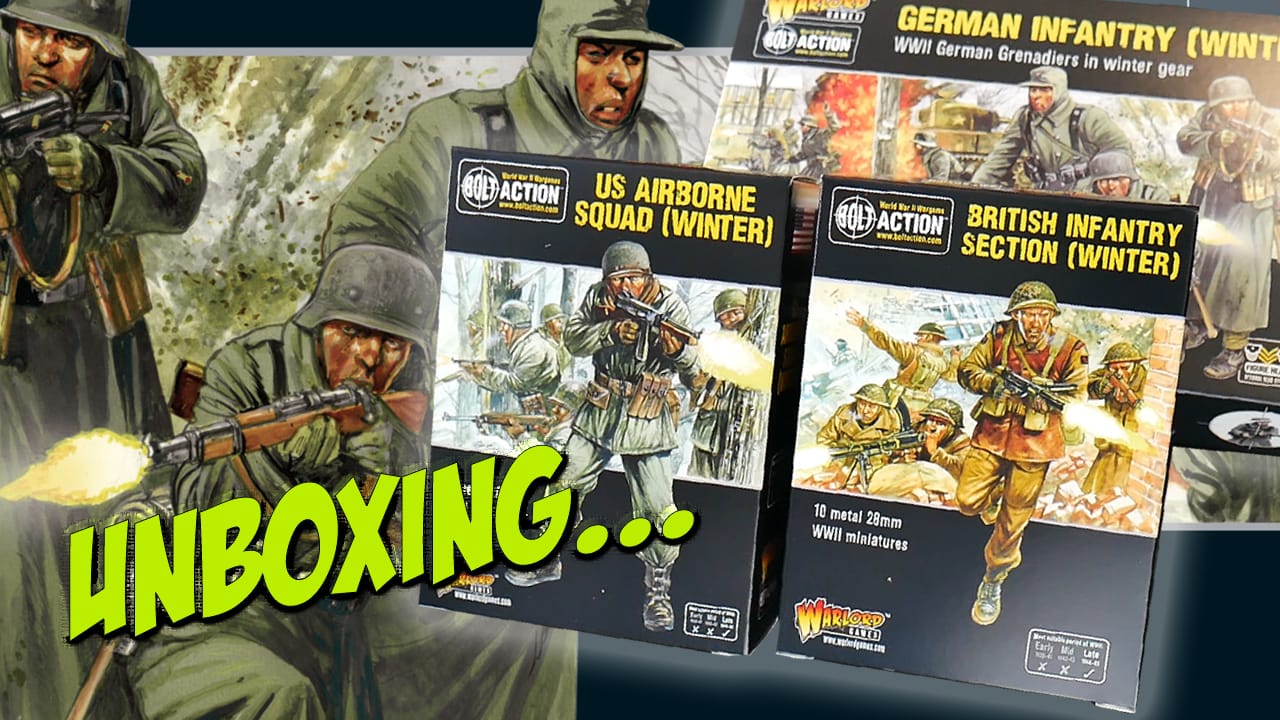 The Bolt Action rules from Warlord Games now cover pretty much every earthly location where World War Two was fought. So, having covered every location, they have moved on to offering troops for every season, in this case German, British and American troops ready for battle during the depths of ‘General’ Winter himself .

The first boxed set is 30 plastic multi-pose miniatures designed to represent German Grenadiers. These figures are clad in standard issue greatcoats with equipment worn over the top. They would suit the Western Front in the depths of winter or be reasonably ready to deal with the winter battlefield conditions on the Eastern Front.

The frame contains enough weapon and equipment options for you to field your troops as Heer or SS soldiers from 1939 all the way up to the end of the war. A nice touch is the inclusion of both the MG34 and MG42 light machine guns, plus STG-44 and Kar-98Ks in the same set, covering the typical composition of a unit armed with early or late war weapons.

There are five of the same frame in the set, which means that you could create up to six five man squads from a variety of periods from the same box. A really well thought out box of ‘generic Germans’ that shows Warlord at its best.

The next boxed set contains fewer figures but are all cast in metal. The British Infantry Section (Winter) – (which, lets face it, is probably how they’d be described by the War Office) contains the standard Warlord layout of NCO and soldier with SMG, a 2-man LMG team (a Bren of course) and 6 Riflemen with the SMLE .303 rifle.

These figures are clad in greatcoats, woolen lined leather jerkins and gloves, and includes one figure with a ground sheet in camouflage pattern. Most wear woolen caps beneath their helmets and scarves as well. These could be used for the mountains of the Italian Campaign but, by dropping the two Sten SMG armed figures, could also serve as British troops for the brief campaign in Norway during 1940, although they lack the gas mask case.

This set of miniatures wears the M1943 pattern ‘jump’ fatigues of the US Airborne, augmented with gloves and scarves. Consequently, these figures can only be used to represent the ‘Battling Bastards of Bastogne’ or their associates who fought during the Battle of the Bulge in 1944.

These are three really useful boxed sets which add variety to the forces which may be fielded for Bolt Action. The most varied set is the plastic one, as so much can be done with it, but its good to see that Warlord continue to expand their figure range for a majority of possible battlefields. Who knows, perhaps they’ll soon be adding troops in tropical or Summer dress for much warmer climes.