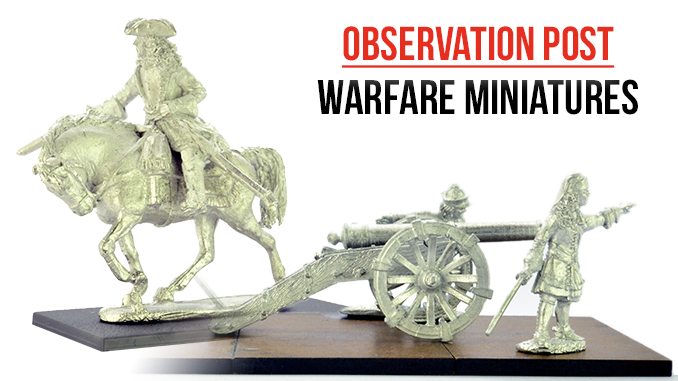 Warfare Miniatures continues to offer the largest range of miniatures for the Horse and Musket period from 1680 to 1714, with a recent focus on the Great Northern War and Scotland’s wars from 1640 to 1719.

In fact, there is so much variety in the range that we’ve decided to focus on the overall look of a few figures rather than trying to encompass them all.

The Great Northern War Russian artillery range has five different crew members that are posed in the act of moving and positioning the field gun that we were supplied with. The crew all wears the kartuz, the traditional Russian headgear. This is a nicely animated set that could just as easily form part of a vignette on the tabletop.

The next figure is typical of the various command and personality figures that are an integral part of the whole range. The figure shown here is a French officer, mounted for ease of movement upon the battlefield.

Every Warfare Miniatures figure is based upon the most meticulous research and is as accurate as possible. Some could say that the subject matter is somewhat obscure but when a niche is filled with such aplomb, then the gamers shall come. For more information and to see much more of this excellent range, check out the League of Augsberg website.