28mm War of the Austrian Succession 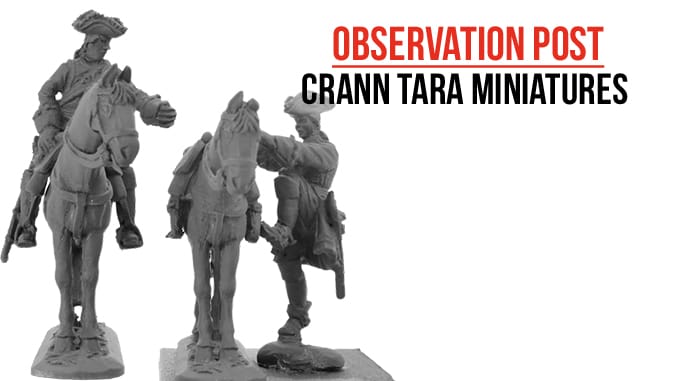 Crann Tara Miniatures continue to add to their range of miniatures for the War of the Austrian Succession. We have Mousquetaires and Chasseurs to show you this time around, a vignette and a pack of skirmishing infantry from the French army of the period.

The vignette consists of four figures in total, two ‘riders’ and two horses. These are French Mousquetaires of the Guard. One figure is in the action of mounting his horse and the other is already mounted and holding the reins of the horse as the latter does so. The uniforms and equipment on the figures appears very well done, from the fur on the tricornes down to the symbol of the regiment, the white cross from when they were founded during the wars against the Huguenots.

The infantry pack consists of four figures in the distinctive uniform of the Chasseurs de Fischer, a light infantry unit initially raised to fight for France by a German officer. This was the origin of all other regiments of chasseur regiments in French service from then on. The figures are depicted in skirmishing poses, either firing or on the move.

The Crann Tara Miniatures range owes a great deal to the style of the Spencer Smith Miniatures and Stadden era, which is no bad thing if that’s what you are after. The level of detail on the figures is excellent, but they have a more ‘toy soldier’ look than other ranges.