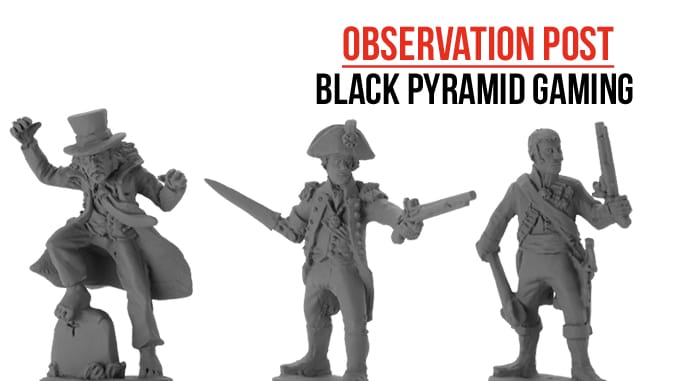 Black Pyramid Gaming has produced more in the Vox Populi range, requested by customers via their own Facebook page. These are characterful miniatures based upon various tropes, most recently three which are suitable for some 19th Century gaming.

The first figure is designed to represent Spring-Heeled Jack, based upon an illustration from the era of the Penny Dreadfuls, either a villain or anti-hero for some classic Victorian skirmish games.

The second figure is based upon Admiral Nelson, but a Regency Gothic hero outfitted with weaponry to engage the ‘Unmentionables’, the undead who threaten the living. That missing arm has been replaced with a cutting weapon and he wields a ship’s pistol for some long range firepower.

Lastly, we have Lord Arthur Wellesley, armed with a mace, pistol and sword, also ready to defend against the encroaching undead. His uniform is rather fine and his pose suitably heroic.

These figures are well sculpted and accurately depict uniform and weaponry. The poses are suitably heroic or dangerous looking and are very characterful. The figures are on the smaller side of 28mm, meaning they should fit with those from the Perry range or similar, or the complimentary figures available from Black Pyramid themselves. This range continues to impress and offers something different for those with a hankering for it.