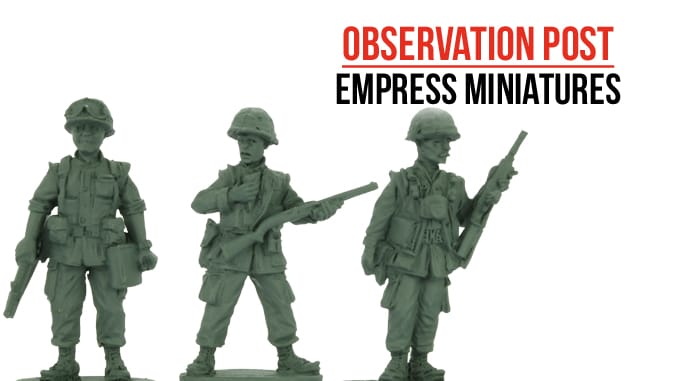 Empress Miniatures and Paul Hicks continue to add to their US Vietnam range. The latest releases represent some of the key personalities of the 1968 Tet Offensive on the American side, plus some of the first releases of North Vietnamese Army figures.

The American personality pack, known as Nam 12, includes Dale Dye who became famous for his work as an advisor and actor in Hollywood epics such as Platoon, Saving Private Ryan, Band of Brothers and Last of the Mohicans, etc.

We also have Lt Col. Cheatham, who served as the CO of the 2nd Battalion 5th Marine regiment, Gunnery Sergeant Frank Thomas, who carried the Stars and Stripes and is seen getting it from inside his flak jacket, and Captain Christmas, Officer Commanding H Company, 2/5, whose unit captured and raised their flag over the provincial headquarters in the triangle on the south side of the Huong River.

The NVA sculpts may be more ‘generic’ grunts of the period but the quality of pose, equipment and sheer ‘action’ are excellent. This is one of two new 4 figure packs that will hopefully see rapid growth.

These are physical sculpts that really capture the appearance of each of the warriors concerned, a speciality of sculptor Paul Hicks who has an affinity with such projects. The personality figures are great, but so are the more generic figures in the range.