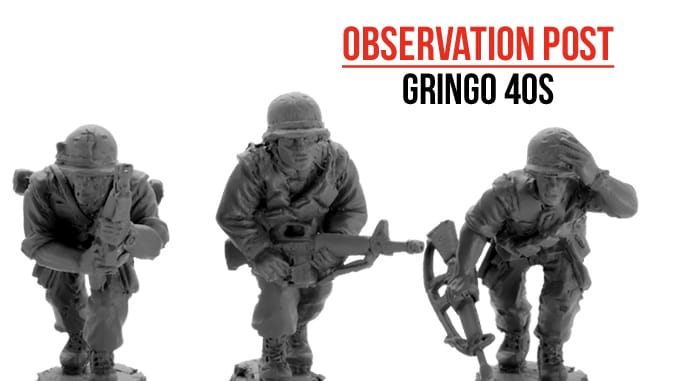 Gringo 40s have finally been able to release their own range of 28mm figures to represent the combatants during the Battle for Hue in early 1968 during the Vietnam War.

Just recently, the world of 28mm miniatures has gone from one or two figure ranges designed for troops fighting during the Vietnam War, to a Claymore-like explosion of ranges designed for one particular battle. We’ve already covered the continually expanding ranges from other companies, and now here we are with another set.

At the moment, this expanding range only covers the United States Marine Corps, but future plans include all the relevant combatants and their support weapons, plus vehicles. Its perhaps worth noting that we only have one pack of 4 figures for review, allegedly due to the fact that the stockist is finding it difficult to keep stock levels up due to sales. And, to be honest, we can see why.

The other new ranges for the distinctly asymmetrical, urban combat that typified the Battle of Hue are great. Yet these figures from Gringos take that greatness and add a level of excellence in terms of research and sculpting style. Each figure in the pack we have is an individual, and has been sculpted from the ground up with this in mind – there is little evidence of the use of the normal ‘blanks’ or ‘dollies’ having been used here, which may explain the distance between first announcement of the range and final release.

Weapons, equipment and uniform appears to have been sculpted based upon some serious research. Inspiration has seemingly been taken from photographs and TV footage of the time, adding a layer of authenticity to these characterful sculpts. All the figures are in ‘active’ poses, they are all doing something, whether racing to cover or scanning for the enemy.

Admittedly, these figures are at the large end of the 28mm size, but this aids in seeing the level of detail on each one. The animation and overall sense of movement on the figures is excellent, as is the lack of uniformity in their choice of equipment or ‘combat specific modifications’ made to their uniforms. In a suddenly slightly crowded market, these shine out as one of the main ranges to watch.