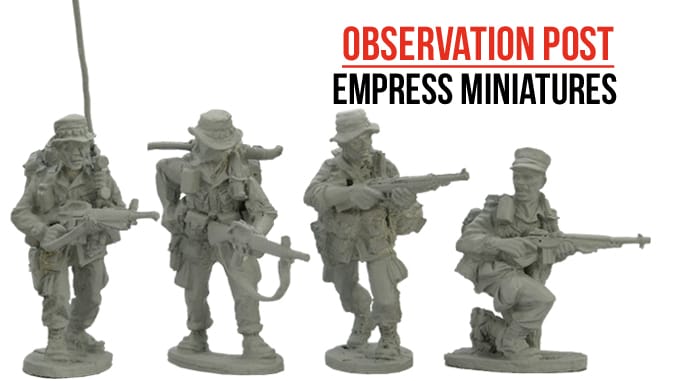 Empress Miniatures continue to maintain a frenetic but much appreciated release schedule for their Vietnam range. One of the most recent packs is labelled ‘USMC Recce’, representing a US Marine Force Recon unit on an operation deep within enemy territory.

Unlike the Long Range Reconnaisance Patrol created by the US Army, the Marine Corps fielded between 6 and 14 men to a unit. This was variable, as operational requirements dictated. Unlike the Army, the Marines didn’t use local tribesmen as a part of their operations, relying upon their own skills as jungle warriors.

The 6 figures in this pack conists of a leader, scout, Navy Corpsman and a radio operator with a long aerial. Typically, units would take to the field with a mix of weapons, from the M16 to sawn off pump shotguns, the reliable 7.62mm M14, the M1 carbine and the M79 Grenade launcher. Each man would carry a side arm, their  personal weapons and a personalised equipment package of webbing, backpacks and choice of headgear. Noticeably, these men are equipped for a long operation, with plenty of kit and additional water bottles to stay hydrated.

These are very nicely sculpted figures, with an excellent sense of movement as they move through the jungle. In addition, each figure has its own character, a real sense of being individuals. The only slight negative is the overall size of the figures, meaning that they happily mix with others from the Empress stable but won’t mix quite so well with the other Vietnam era figures currently on the market.