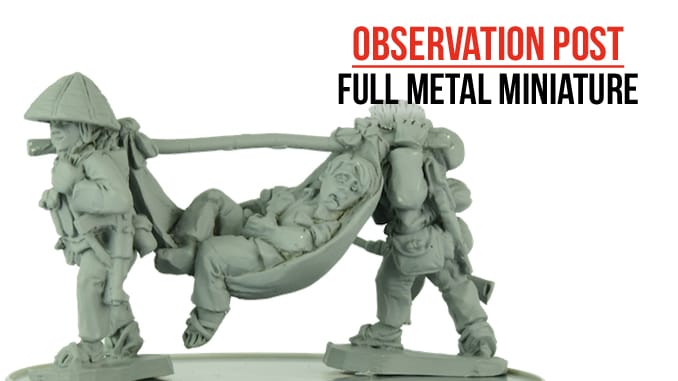 Full Metal Miniatures have added a new and unique pack of 28mm figures to their Vietnam War range. Viet Cong Set three shows the nature of a standard ‘medevac’ or medical evacuation by Viet Cong Local Forces during the war.

The set depicts two female Viet Cong carrying a wounded comrade slung in a poncho from a bamboo pole. This was a very common way to move the sick and wounded during the war. Porters were used as most of the trails were over rough ground.

The two female porter figures have a typical combination of equipment, with Chinese or Soviet-style magazine pouches and US style canteens. They also have sandals, cut from perhaps car tyres, and one carries an M1 Carbine in her right hand.

In all, there are four parts to the set, requiring some basic assembly. These are Local Force fighters, so wear civilian clothes, enabling them to fade into the local populace if challenged.

These are nicely sculpted miniatures. They have a sense of character and could function as an objective or vignette on the tabletop. However they are used, they fit well with the other figures in the range and those from different manufacturers as well.