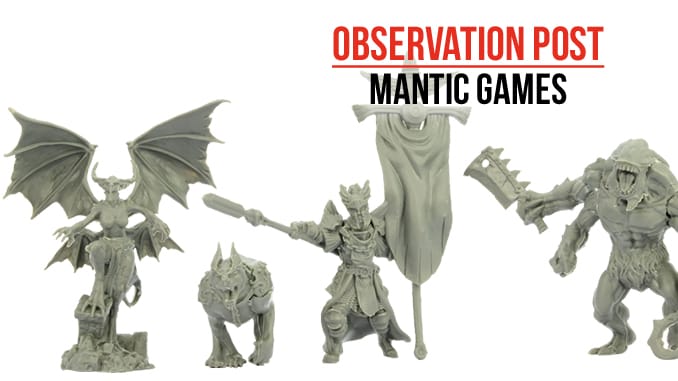 Mantic Games have begun to support their new Vanguard game with miniatures from a range of factions.

TheVanguard rules are designed to reflect skirmish level combat between small groups of miniatures. To that end, Mantic have begun to release packs of 28mm resin miniatures which consist of figures from each of the various factions.

The first release consists of the figures from Faction Starter sets, which have suitable stat cards in the boxed game and ‘booster’ packs of figures for the NIghtstalker, Basiliean, Abyssal and Northern Alliance, with more planned for the future.

The resin figures are provided on sprues with a number of optional parts, allowing you to customize your Warband. The final figures are all extremely characterful and in much more active poses than some of those found in the Kings of War battle game. The focus upon individual action and small scale ‘missions’ makes this an important factor in the sculpting of the miniatures.

Although intended for use with the Vanguard rules system, these figures would work as characters or adventurers for use with other games. The customizing options mean that no two figures need be exactly the same, which is always a useful element. With more to come, the range is worth watching and investing in by anyone interested in the fantasy genre.

Find our flipthrough of the Vanguard rule book here