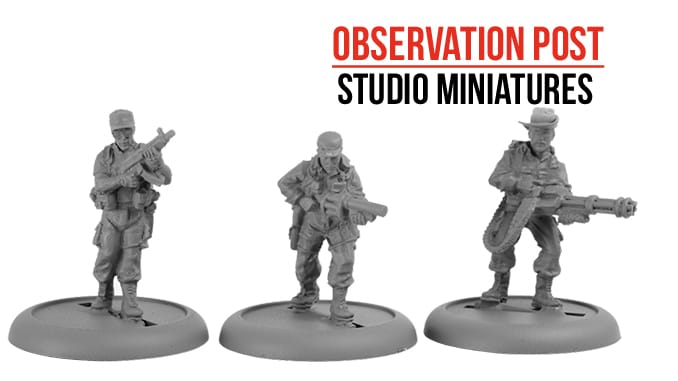 Studio Miniatures continue to release miniatures to support their Turf War Z rules system. Taking their inspiration from the world of the movies , one of their latest releases is a set of seven heavily armed miniatures, ready to hunt down both the predatory survivors and the shambling undead.

The set includes one Leader figure and six Gang members, following the format already used with the Turf War Z rules. Each of the figures is a distinct character, attired in light clothing and equipment for warmer climes. They also pack some serious firepower, ranging from MP5 SMGs, M16s with various attachments to grenade launchers and miniguns. These are hard faced men, ready to take on a mission and carry it through to the end, no matter what the cost.

The figures themselves are packed with character, firmly placed within the action movie genre of the 1980s. They’d fit almost any genre of game, from sci-fi to post apocalyptic, special forces operations to criminal gangs.

This is just one of the many sets of excellent figures offered by Studio Miniatures which pays homage to the movies and television of the past. All are useful for a range of genres and a number of rulesets.