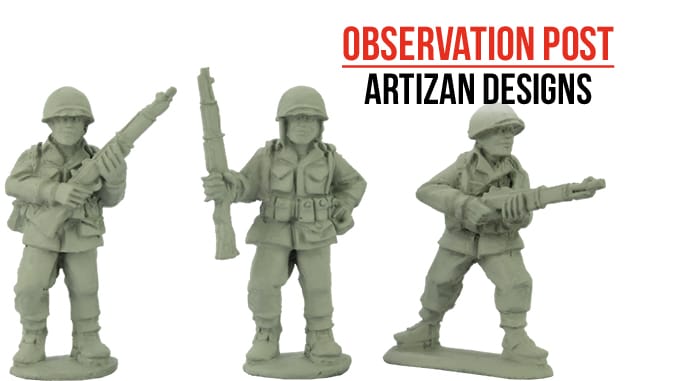 Artizan Designs, distributed by North Star Military Figures, have a new pack of miniatures to add to their World War Two range. This time we have four metal figures representing US GIs for use in the period 1944 – 1945.

The figures wear the M43 combat uniform, first issued during the Winter of 1944. This is supplemented by the M43 combat boots with their distinctive buckles. They wear the standard combat helmet and equipment and are armed with the M1 Garand automatic rifle.

These figures would work for troops fighting in the Ardennes during the Battle of the Bulge, the drive into Germany or any other Late War battles.

These are, as always, top quality sculpts in the typical Mike Owen style, with plenty of options for the use of paint washes. Given the fact that this and the Crusader Miniatures range pretty much complement one another, North Star is pretty much a ‘one stop shop’ for anyone looking for a superior style of 28mm World War Two figures.