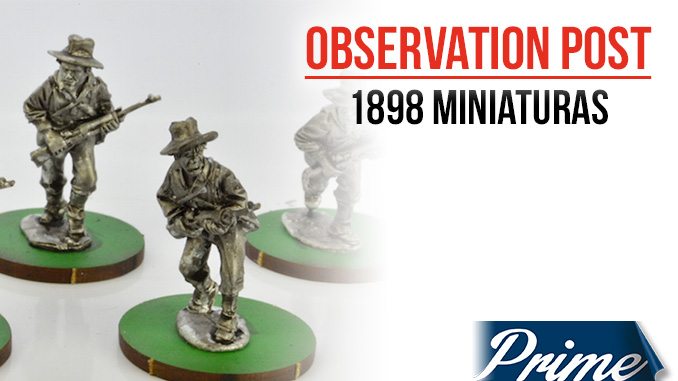 Spanish company 1898 Miniaturas have managed to carve themselves something of a niche in the Colonial era market by producing figures for the Cuban and Filipino wars of the late 19th century. Their first releases featured Spanish and Filipino forces for the period. Well, their latest releases introduce one of the main opponents both nations faced, the forces of the United States.

There are six packs so far which represent US troops. Three of these are dismounted Cavalry or Rough Riders for the Spanish-American War over Cuba and the other three are US Federal Infantry which can also be used against the Spanish but may also represent troops operating against the Filipino army and insurgents.

The Cavalry/ Rough Riders have a Skirmishing, Advancing and Command pack of six figures for the first two and four for the last. They are in the relevant cavalry uniforms of M1883 overshirts and suitable equipment and wear wide brimmed hats. They are armed with Krag-Jorgenson Carbines, although the Officer wears his field uniform and carries a revolver. The command pack also comes with arm and head options to create a standard bearer or another NCO figure.

This basic pack design is mirrored in the US Federal Infantry packs, although the troops are armed with the Krag-Jorgenson rifle instead.

Just like the first releases, these figures are nicely sculpted and are in a variety of ‘realistic’ poses. There are more packs planned for all the parts of the complete range. In addition, there are incentive miniatures that can be provided if you take advantage of the deal prices on offer. In the case of the USA, the Premium Collection ‘reward’ is a figure of Theodore Roosevelt himself in his Rough Riders uniform. Available direct from Spain or via Empress Miniatures, these are excellent miniatures and worth investing in.