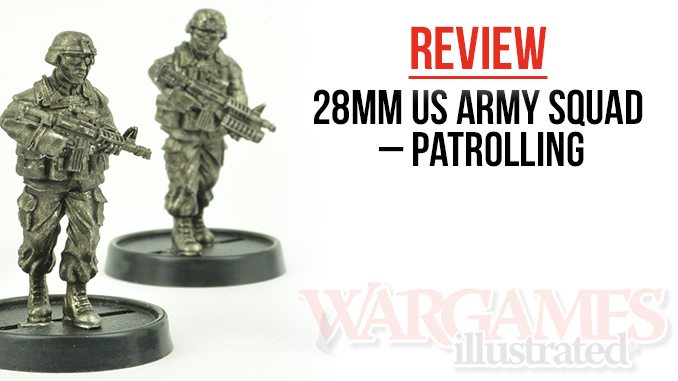 Over the past 10 years the interest in gaming modern conflicts has slowly grown with more and more manufacturers entering the market. This 28mm offering from The Miniature Building Authority represents a squad of nine US army in ACU and Interceptor body armour suitable to portray troops in either Afghanistan or Iraq from 2001 to the late 2000s. The first thing that struck me about these models was how robust they are, they are all single piece castings, the only point of weakness on the miniatures being the weapon barrels but even these are considerably more substantial than those found on similar miniatures such as those produced by Empress or Spectre.

Being single piece castings, assembly time for these models is minimal, all that is required is to attach then to the bases included and they are ready for a coat of paint. It is also worth noting that the amount of clean up required was minimal, the casts were very high quality with no flash and minimal mould lines. However, this durability and ease of assembly comes at a cost. The poses of some models are a little off with the positioning of the arms being the main issue, the M249 gunner having arms which seem longer than necessary and the squad leader in a pose that resembles Drake’s dancing in the video for ‘Hotline Bling’.

There is a good level of detail on the weapons, webbing, and uniform but this is let down by the faces of the miniatures. Not only are all the faces identical with identical expressions for every figure in the unit but in addition every figure is modelled wearing sunglasses. This means that, due to only the lenses and no frames being sculpted on the figure, they appear on the model like large insectoid eyes. When compared to similar products produced by Empress or Spectre, The Miniature Building Authority 28mm figures are a little on the tall side (with their eye level being 30mm) but would not look out of place mixed with figures by other manufacturers.

Overall I do like these figures, they are quite characterful and ideal for a high-risk gaming environment (i.e. playing with children or someone who tends to drop things, ‘that guy’ at the club). Whilst they do have their shortcomings I feel they are rather minor and is more a matter of personal preference. It is worth noting that The Miniature Building Authority have only recently started producing 28mm modern figures and as an initial offering these are rather impressive. I look forward to seeing what they produce in the future.