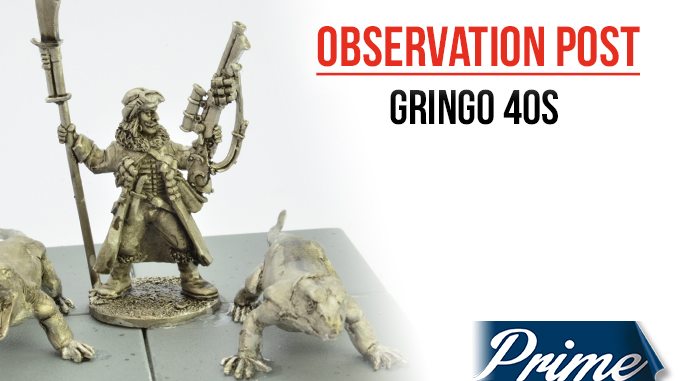 Although known for producing high quality historical miniatures, Gringo 40s have been known to branch out into other genres. Yet these new genres maintain the same high quality that we’ve come to expect from the company.

One of these ranges is the Zombie Hunters, which currently consists of 15 packs, mostly single figures but also a pack of three.

The entire range consists of a series of characters, most in civilian clothing and armed with everything from assault rifles to crossbows. Our favourite is Gabriel, the Komodo Dragon Master. This miniature may be bought as a single or as a set with two Komodo Dragons.

Gabriel himself is a fairly eccentric looking character, his long hair partially held back by a type of turban, sporting a fine moustache and with diving goggles on the front of the turban. His long coat has a fur-lined collar, worn over what looks like a hussar or dragoon jacket. In his left hand he holds a seemingly large calibre rifle with a sniper scope. The large calibre is suggested by the sheer size of some of the cartridges carried about his person. In his right hand, he holds some sort of halberd-like weapon, ready to engage zombies at a distance, quietly.

Quite how useful Komodo Dragoons are against zombies, we have no idea. But, as sculpts, these are great looking beasts, with one hissing in defiance and the other perhaps quietly contemplating its prey.

Now, not really a zombie hunter, but a part of mine and a number of other, er, older gentlemen’s childhoods is a figure from the 1950’s British Comics range. This is a young man in military uniform, probably around ten or twelve years old, operating a device on his wrist that appears to be controlling a small tank which precedes him. Personally, I encountered a similar character reading certain comic books of the 1970’s, sometimes in reprint form. As a piece of nostalgia, this figure appeals to me and is already earmarked to form part of a group for one of my favourite skirmish games.

The Gringo 40s website should be on everyone’s list to visit, whether you’re into historical, sci-fi or post-apocalypse gaming. If you catch up with young Ged, the owner, at one of the numerous shows he attends, its worth having a chat and a browse and you’re guaranteed to leave with a packet or two of something.