28mm Toughest Girls of the Galaxy 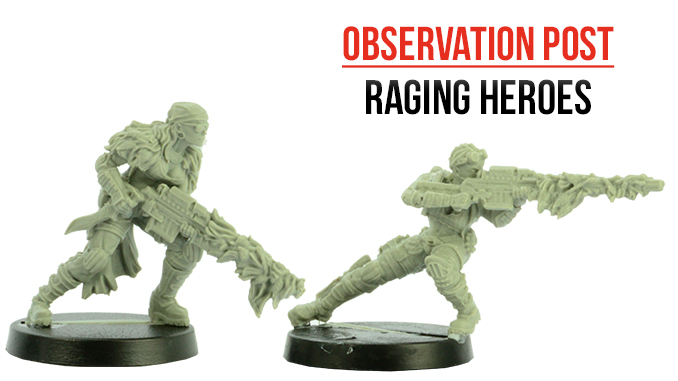 Raging Heroes are a small company based in the South of France who have used Kickstarter to create a number of Fantasy and Sci-Fi miniatures. Some of their latest releases have been for the Jailbirds, a faction for their sci-fi universe with more than a touch of post apocalyptic style.

The standard of sculpting and casting on these miniatures continues is very high. Offered in high quality resin, the level of detail is excellent and serves to lift the sculptor’s efforts to a new level.

The Jailbirds are one of three factions to be found in the Toughest Girls in the Galaxy (or TTG) universe, the other two being Iron Empire and the Kurganovas. They are styled in what could be called ‘Grunge Chic’, a mix of tattered clothing and their own choice of accessories, making them an excellent choice for those looking for raiders or gang types.

The two packs we have on show here are typical of the overall look and quality. The figures come in either 3-figure ‘unit’ boxes or 1-figure ‘character’ blisters.

The Jailbirds Snipers Box has three figures armed with heavy sniper rifles and are dressed in their own unique choice of clothing. Vest tops, leather and other material military style equipment add to an overall ‘ragtag’ look. Many of these boxed sets contain alternate parts, such as heads and arms, to customize your miniatures.

The character blister contains ‘Punky’, an army standard bearer with a suitably large flag and an attitude. She comes with alternate arms, one with a pistol and the other with a knife.

If you are looking for female figures to populate your sci-fi tabletop, especially ones with a Post Apocalyptic theme, then these are the miniatures you’ve been looking for. The entire Jailbirds range covers every conceivable type of warrior, from Warbikes to Mecha, cool characters to rank and file troopers. The company has a wealth of interesting miniatures in an ever growing series of ranges and are well worth checking out.