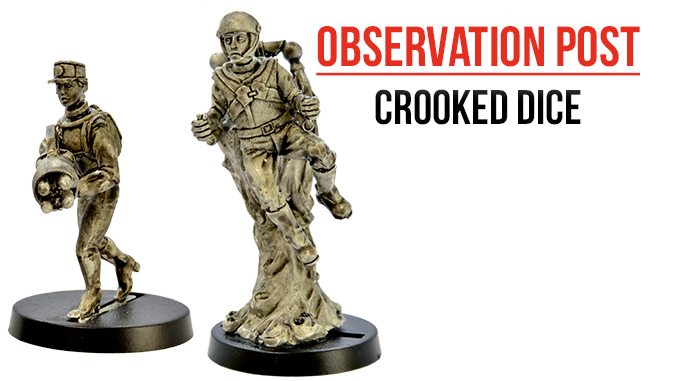 The Crooked Dice Game Design Studio is always hard at work, commissioning and releasing miniatures and rules supplements from a range of sculptors and authors. Their latest offering harks back to one of their original releases, the Time Lift Security organization.

This three figure pack consists of, in game terms, a Hopper, a Netter and a Heavy. There are two male figures and one female, all with different equipment that operates within the 7TV Second Edition rules.

The first figure is the Hopper, a male in uniform wearing a jet pack. He is depicted taking off in a swirl of jet exhaust, once the pack has been attached. This is a jet pack with a touch of the 1960s, perhaps a little touch of James Bond.

The next figure is a female in a recognizable uniform, wielding a large looking weapon. This is the Netter, carrying a netgun, which is deployed by weighted rockets. It’s an advanced looking version of the ones that are available in real life.

The last figure is a male with a backpack power unit connected to a large firearm. This is the Heavy, ready with a large energy weapon or similar to target large creatures, armoured vehicles and tough targets.

All three figures are well sculpted and have suitably grim expressions, supporting their brethren during missions. They are just part of the upcoming releases for the Second Edition version of the Time Lost programme guide, which is due for release fairly soon.