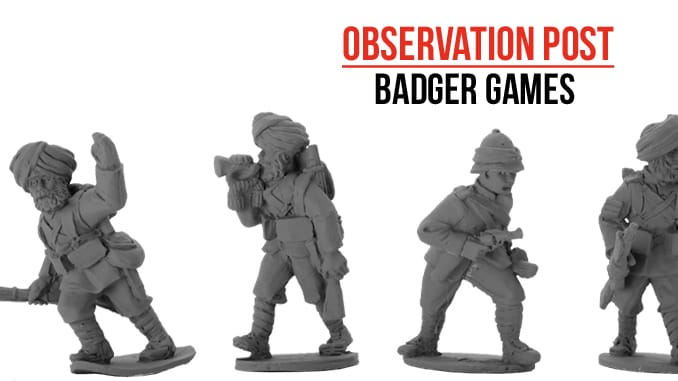 Badger Games have a huge variety of miniatures, many of which have not been readily available for a while. One of these ranges is the old Pontoonier Miniatures Colonials, intended for the Third Anglo-Burma War but suitable for other ‘small wars’ of the Victorian era.

The Sikh Command set consists of four figures, a British officer, two Sergeants and a bugler. These are all depicted in fairly active poses, giving orders and leading from the front.

The Ghurkas Advancing are in full kit with rifles ready, pushing forward to reach their position. A nice touch is that the Ghurkas are ‘scaled’ against the Sikhs and the British officer, so they are slightly shorter but no less fierce looking!

Although these are miniatures from an old range, they are crisply cast from obviously updated moulds. The overall look of the miniatures is excellent, with accurate uniform details for the 1880s. Once again, the Badger Games team have worked hard to bring ‘lost’ ranges back to life, and have done so with some style.