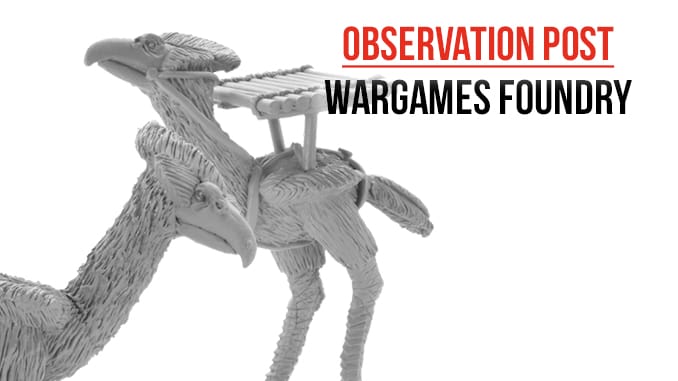 Wargames Foundry has begun to add more and more new or re-released products to their ranges. One of the latest are packs of prehistoric-origin Terror Birds, flightless carnivorous creatures that frequented what is now South America.

There are 8 single figure packs in all, ranging from ordinary apex predator creatures to a two-headed mutant. Three of the packs come with platforms that may be added to the birds’ backs, allowing other figures to ride upon them and suggesting that these dangerous, hook beaked killers can be domesticated!

These are nicely sculpted miniatures with a real sense of feathered menace. The figures tower over other 28mm miniatures, and the sculptor has managed to capture the sense of them being able to take on most enemies. They would look at home in a South American adaptation of the Congo rules or a similar Lost World adventure.

It’s good to see that Foundry is producing new packs once more and I hope that this is a continuing trend. As we discovered when we visited them last year, there are many master sculpts, molds and archived ranges that are simply waiting for the busy staff to bring them to the light of day.