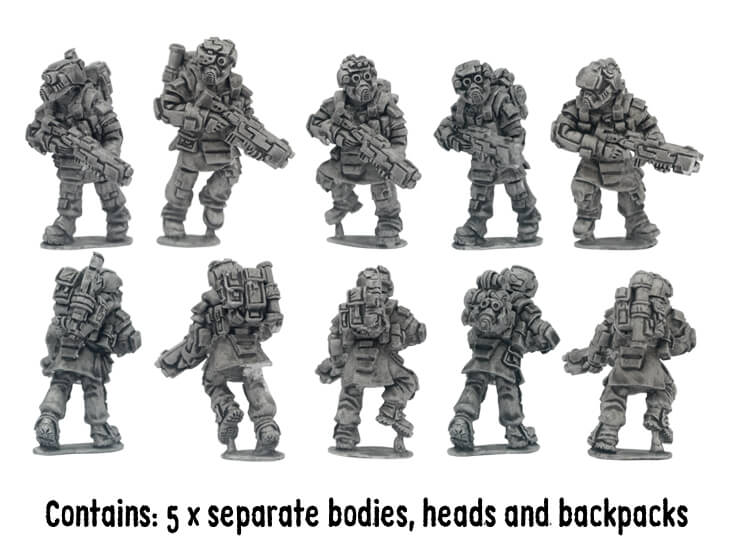 This release from Pig Iron further expand their Kolony Wars setting with packs of models and accessories for the System Scavengers – ruthless artefact hunters seeking out lost treasures in the “Burn”, a poisoned wasteland reminiscent of Rogue Trooper’s Nu-Earth.

There are two packs of five unique models available (£10 each), as well as a set of twenty heads and backpacks, and one of forty smaller pouches (£5 each). The casting is so crisp and clean that I would feel no compunctions about spraying the models straight out of the bag. Given their realistic stances it is hard to produce a meaningful average, but they stand about 30mm foot to eye. Their proportions are similar to Artizan and other chunky manufacturers.

The models in packs SS1 & SS2 are only the first ones planned for the Scavengers, and represent the guards who provide the muscle on their expeditions. Their equipment is not as technologically advanced as that of the System Troopers, so they would be great for near-future infantrymen here on Earth. They wear combat boots & trousers under heavy smocks, webbing and ballistic armour, in what looks like a logical extrapolation from the changes in uniform over the last seventy years towards comfortable, rugged equipment in the field.

When it comes to sci-fi, everyone looks at the guns and helmets first. Well the helmets are menacing. Their basic silhouette is familiar to any modern gamer, but the addition of a respirator and built-in goggles makes them look somewhat alien and impassive. They look a bit like the sort of thing you might expect to see doodled around the edge of a Future Soldier 2030 proposal. The guns are bulky clip-fed carbines with none of the elegance of recent military rifle designs – but full of the brutal, lethal aesthetic I have come to expect from the Kolony Wars range. Pig Iron have stated that the lack of heavy weapons is because the Scavengers rely on their APCs for hard-hitting support.

The men in SS1 are patrolling or moving cautiously across the battlefield, while those in SS2 are still, either firing or keeping a weather eye out. They are all three piece models in the same vein as recent Napoleonic plastics – body, head and backpack. Since the heads are ball-and-socket, it is a simple matter to swap them around from body to body for a bit of variation within a platoon. Similarly, the backpacks fit equally well on all of them, so they can be issued as you prefer. They are not greatly different to each other, but from one hangs a helmet, another a pistol, a third a rifle, and from the last two what might be mortars, anti-tank weapons or sci-fi telescopes.

HD27, the set of heads and packs, contains ten heads and ten backpacks on two sprues identical to the ones found in SS1&2. There is not much need for these if you are building an exclusively Scavenger-based force, but if you want to use their heads for conversions, they come at a respectable price.

EQ4, the forty pouches, is in a similar predicament. The System Scavengers are already loaded for bear in terms of equipment, so there is almost nowhere to attach them to their associated models – but with their various sizes and slight differences in design, they are great conversion fodder for other miniatures.

Overall, I really like these models. They are more expensive than many historical miniatures, but in line with the usual cost of playing sci-fi outside The Hobby That Shall Not Be Named. Pig Iron have had my friends and I eyeing their catalogue greedily for years, and these models have kept that up (for them – they’re mine now!)!