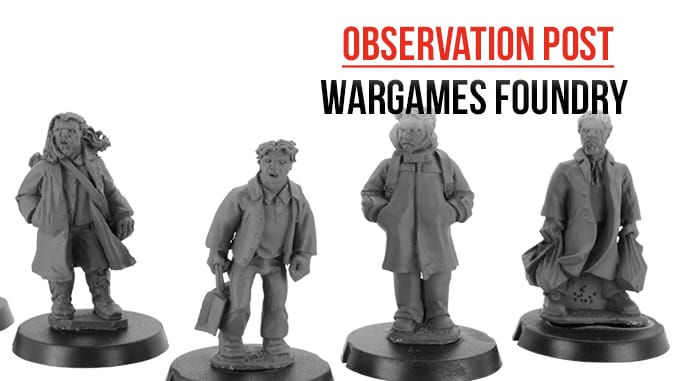 Wargames Foundry have produced two packs of miniatures that not only serve to celebrate ‘those who served’ but also would be of use to a number of Modern or Ultramodern wargamers.

SV067 Factory Staff and SV068 Street Violence Civilians are that rarity amongst the world of 28mm miniatures, characters in modern dress that aren’t wielding some sort of weapon.

SV067 (seen below) contains 5 figures which represent a number of staff that have worked at the company, and a fine body of folk they are. Each is posed and attired differently, and capture a character as they would have appeared to the sculptor. Each would therefore look good in a street scene as a NPC or as an objective on the tabletop.

SV068 (seen below) also contains 5 figures, this time representing a number of Foundry ‘heroes’, past and present, which have been a part of the history of the company. All of these figures carry some type of bag, whether a backpack, shoulder bag, messenger bag or carriers! Again, these are nicely done, wear a variety of clothing styles and have a multitude of uses.

The important thing about these packs is that they are unarmed types in amorphous, modern fashions. Consequently, they can be used as folk from the 1970s up to the present day and can easily be painted to represent people from a variety of backgrounds. The lack of unarmed civilians amongst Modern-era players is oft mentioned and these, plus other packs from the Street Violence and Warmonger ranges, are just one way to find a solution. Plus, if you want to see more, buy these and give Foundry the chance to produce more figures you haven’t seen!