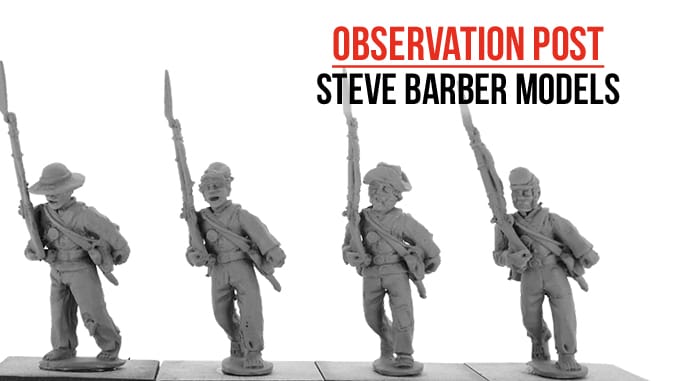 Steve Barber has been sculpting miniatures for many years. In amongst his 28mm ranges are some well sculpted miniatures, some of which take a different approach to the creation of an army.

The latest range on offer is designed for the Thirty Years War. These come with separate heads, allowing you to vary the figures within a regiment or theme the unit as desired. This particular pack contains six figures, designed to represent a command group, with 2 officers on foot, 2 drummers, and 2 standard bearers. The pack comes with a number of banner poles upon which a standard may be hung. Shown here is one of each miniature, with a choice taken from the separate heads which have been supplied. There are currently 12 packs in the range, including two that are simply heads. The figures are all in fairly generic clothing with generic weapons, meaning that they can be used for any of the armies during the war.

The second pack takes us to one of the mostly forgotten European wars of the 19th Century, the 1848-1849 Hungarian Uprising. Taken from the Hungarian part of the range, we have General Bem, hero of Poland and Hungary, who also served as an Ottoman Pasha. The pack includes the general himself on horseback, plus three uniformed aides, one with a bugle, the other with the uniform of an officer and the last posed holding the General’s horse. This is a fairly inactive rendition of a battlefield general giving orders, but useful as a command stand.

The final pack is the most innovative in some ways. This consists of six 28mm Ragged Confederates doubling/ right shoulder shift. These are highly detailed multi-part wargames miniatures, where you simply pick legs, torsos, arms and heads to assemble the exact mix of troops you would like, whether Union or Confederate, from named regiments in a particular uniform to a more generic approach or, like here, a ragged appearance. There are also 24 figure regiment packs to aid in army creation, including command.

In addition to the ranges noted above, Steve also has 10mm Ancients and some 28mm Napoleonic figures, plus 40mm figures for skirmish gaming. He also offers a commissioning service whereby Steve creates sculpts for a client, the client pays for and receives a supply of the sculpts and Steve adds them to his store. This works out to the advantage of all concerned, and reduces the costs. Having been a sculptor for so many years, Steve Barber is a useful chap to get in touch with, and his figures have a style and approach that others could benefit from emulating.