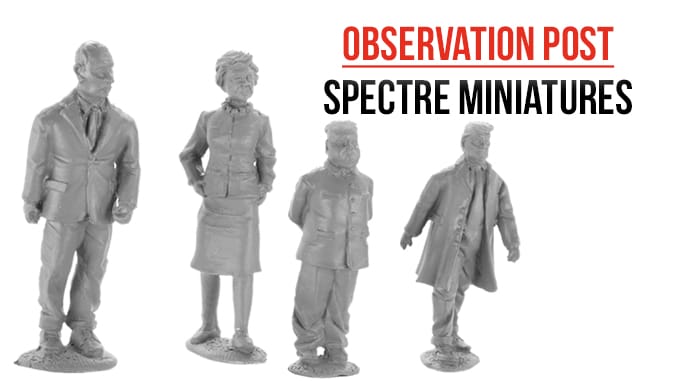 Whilst at Salute, we picked up these two new packs from Spectre Miniatures, a company which offers ultramodern miniatures galore. We have Green Beret Jungle Ops Team and some easily recognisable World Leaders.

One of the great things about Spectre is the fact that they really know their stuff when it comes to the technical kit their figures are equipped with, so we’ve copied the words of Steve May, ace sculptor and owner of the company below:

The Green Beret Jungle Ops Team are based upon close co-operation with actively serving Green Berets while on deployment in Central Africa.

This 6-man Green Beret Jungle Ops Team represents one half of a 12-man Special Forces Operational Detachment Alpha or ‘A-Team’. They are carrying light combat kit suitable for operating in a hot weather environment and are wearing a mixture of combat clothing including Crye Precision pants and baseball caps.

They have in-ear comms, a mixture of lightweight chest rigs and battle belt carrying systems containing front-line gear; ammo, grenades, water, radios, and med kit. They are carrying a mix of M4 SOPMOD Block 2 carbines and SCAR Battle Rifles, all with red dot or x1/x4 switchable sights, tactical lights and lasers. The SCARs have additional back-up iron sights and the M4s have suppressors fitted. SCARs are sometimes preferred as they may be configured to use the 7.62 x 51mm NATO, a heavier bullet which is less likely to deflect off foliage and can hit out to longer ranges in open terrain, as well as offering protection against large wild animals (!). M4s are carried for lightness and the ability to carry more ammo for the weight. Instead of pistols, they have decided to carry additional ammo for their primary weapons.

These prominent world leaders need no introduction, hailing from North Korea, the USA, the UK and Russia and especially active on the international stage in recent times. Two of the figures stride manfully forward, perhaps in earnest conversation with one another, whilst the female figure looks rather disgruntled, perhaps contemplating the future. Meantime, the rotund gentlemen with all his own hair stands in a fairly typical pose, perhaps surveying the might of his nation’s forces as they pass by.

Needless to say, these would make excellent scenario miniatures in ultramodern games, perhaps using the Spectre: Operations rules system or others available on the market. It’s quite rare to see these type of figures, and even rarer to see unarmed civilians or characters that can be used to enhance games in this genre.

Both figure sets are welcome additions to the ever-increasing range of miniatures from the prolific Spectre. The attention to detail and sculpting skills on evidence is excellent, as we have become used to expecting.