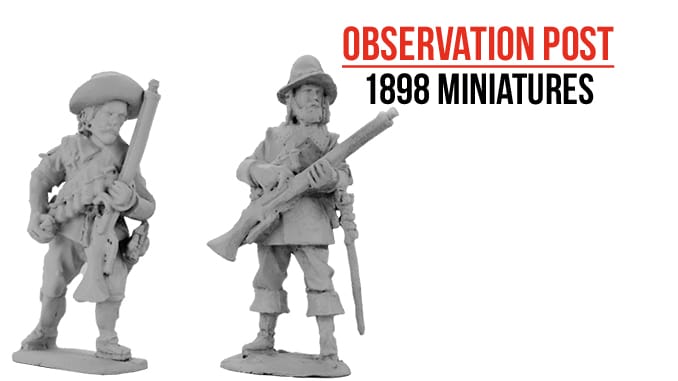 1898 Miniatures have created a fantastic range of Spanish themed miniatures for the classic ‘tercio’ period, 1618 to 1648.

A tercio was a Spanish term for a ‘battalion’ of men, who fought in a ‘combined arms’ fashion, with pikemen, arquebuses and swordsmen fighting together. They fought using a square formation, pikemen in the middle, arquebusmen in a thin rank around the centre ‘block’ and as corner ‘bastions’, with musketmen in support, the swordsmen helping to beat back attackers who got too close.

The figures we have for review have examples of the ‘pike and shot’ armed warriors, depicted in steel helmets or wide brimmed hats. Long, miniature metal spears or similar may be used as pikes for the figures posed to receive them, and the poses of the arquebus / musketeers has a mix of firing and loading. Musket rests are in evidence and the sculpting of all these figures is of a high standard.

There are also command packs, consisting of an officer, standard bearer, halberdier and a drummer. The officer figures come with separate heads, providing an option. Each figure also comes with a separate scabbarded sword which must be glued in place.

The joy of an 1898 Miniatures range is that all the figures are very well sculpted and show the detailed research that has gone into each one. These are great figures, for a period that has much to recommend it to the gamer.